This story from our monthly Informant newsletter explains the staff inspection commander positions I implemented when I became chief. These majors help me know what's happening on the street, both with officers and with major crimes and crime trends. Check out the story below: 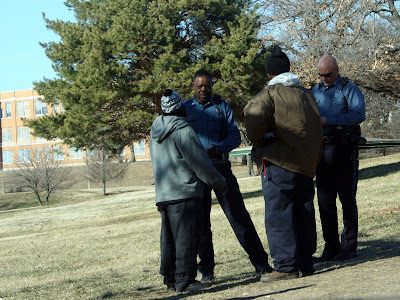 Major Melvin Harvey and Officer Charles Chambers tried to dispurse suspected drug activity in a park.
The title might be intimidating, but the department’s two new staff inspection commanders aren’t out to check whether officers are polishing their shoes.

Forté assigned majors Anthony Ell and Melvin Harvey to the new staff inspection positions when he was named chief in October 2011. Since that time, the majors have been out trying to assist officers on the ground and facilitate community relationships.

“They are two well-respected, high-ranking commanders who are basically the eyes and ears of the command staff,” Forté said. “They’re not to be the watch dogs of the police department. They’re the first phase of organized community policing. They can set the tone for others as leaders.”

Majors Ell and Harvey acknowledged not many department members understand what their position entails.

“At the early onset, people thought I’d be doing a lot of inspecting,” Major Ell told the Board of Police Commissioners. “I think they’ve gotten more comfortable seeing what I do.”

“The unknown scares them,” he said. “I’m more of a support role. And I get out and talk to the community and see what their concerns are.”

Major Harvey said he spends two to three hours every day checking in with community members. They often call him with concerns, too, often about their perception of how police handled a situation.

“I get the officer’s side of the story, and see if we can come to an understanding about why the officer is doing what they’re supposed to be doing,” Harvey said.

Chief Forté said members of the community are largely comfortable coming to Ell and Harvey with their concerns.

“Between the two of them, they know everyone in the city,” Forté said.

Harvey said he’s also there to assist officers however they might need it, especially if they need other elements to respond and don’t have time to send their request through the chain of command.

“I can get them through the red tape,” Harvey said.

Major Ell did just that when a barber was killed during a robbery on Nov. 16, 2011. A witness saw someone flee from the scene into a nearby apartment building. Officers on scene needed help securing the building so they could track down the possible suspect, so Major Ell got a tactical squad there quickly. Two suspects were apprehended and charged two days later.

“On certain days, I may roll up on an accident, and you may see me conducting traffic on 19th and Broadway while officers work the accident,” Ell said.

Harvey said he also does pro-active work, like helping a grocery store owner at 39th and Kensington get rid of people who are dealing drugs behind his store.

But both Ell and Harvey said they respond to major incident calls, speaking with officers on scene. Harvey said he sometimes uses this opportunity to coach officers and advise them. He said he’s not out to get anyone and hasn’t written up a single officer.

Chief Forté said staff inspection commanders were around when he first joined the department, and he doesn’t want the position to be the same as it was then.

“The perception was they were out to capture you doing something wrong, but this isn’t like that,” he said. “We want them to develop relationships with the rank and file. They’re out there every day, making calls with them and talking to residents and businesses.”

Send comments to kcpdchiefblog@kcpd.org.
at 2:14 PM