There's an interesting article in our monthly Informant Newsletter about a former police officer who finds stolen cars using Vehicle Identification Numbers. It's a very specialized position that is yielding good results. Here's the story: 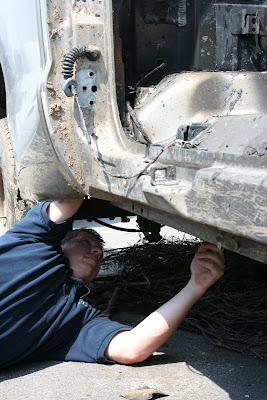 What led New York City police to a suspected terrorist who planned to blow up Times Square with a car bomb on May 1 was the same thing Chris Whitaker looks for every day: a Vehicle Identification Number, or VIN.

In the realm of all things CSI, VINs are not a very sexy crime-fighting technique. But knowing how to find a VIN and determine whether it’s been tampered with can stop terrorists, or, as Whitaker knows, return stolen cars to their rightful owners.

Whitaker is KCPD’s new VIN Specialist, and it is his job to inspect every car that comes into the Kansas City Tow Lot. He also works with the National Insurance Crime Bureau and Department of Revenue doing business compliance checks at scrap yards and towing companies as well as investigating chop shops.


Whitaker replaces Steve Downing, who essentially created the VIN Specialist position five years ago while he was working at the Tow Lot. He saw too many cars that were to go up for auction turn out to be stolen, so he proposed that someone check the VINs on each of them. The position’s duties grew from there. Downing left the spot last fall to enroll in the Police Academy and is now a probationary KCPD officer.
Whitaker, on the other hand, used to be a KCPD officer. After six years on the job, he was shot outside the West Bottoms’ haunted houses in 2001 by suspects he caught trying to break into cars. The shot hit him in the abdomen, severed nerves to his right leg, and he was medically retired. He eventually regained the ability to walk and became director of security at an area casino.
“But I missed the police department and the people,” he said.
He returned as the civilian VIN Specialist in January 2010. When he was an officer, he took a course on cars that got stolen and re-tagged.

“I loved working those cases when I was in the field,” he said.

Whitaker is technically part of the East Patrol Property Crimes Section, though he works all over the city. Sergeant Keith Ericsson said Whitaker’s specialized training and knowledge allows him to identify a stolen car from just a door or an engine part.

“It’s something an officer couldn’t do,” Sergeant Ericsson said.


Especially if the car is burned out. On one balmy May day, Whitaker lay on the ground using sandpaper and mirrors to find a VIN on a truck that was set on fire after its doors, tailgate and seats were stolen.
Automobile manufactures put VINS in a couple of obvious places, but they put them in a lot of hidden ones, too. The location varies by make and model of car, and it’s Whitaker’s job to learn all of them and to know what altered ones look like.
“It’s funny, I was never really a big car guy,” he said.
Whitaker’s work returns stolen vehicles to their owners and allows insurance companies to recoup some of their losses. He also helps break up rings of organized auto thieves. Charges could soon be filed in one of his biggest cases to date.
“VINs are the only way we can know who might be the legal owner of a car,” he said.
Send comments to kcpdchiefblog@kcpd.org.
at 4:05 PM