Celebratory gunfire is dangerous and illegal

Shooting a firearm within Kansas City limits is illegal on New Year’s Day and every other day.

Police warn residents not to fire weapons over the holiday. Celebratory gunfire can be deadly. Blair Shanahan-Lane, 11, was killed by a stray bullet on July 4, 2011, outside an east Kansas City home. The shot that killed her was fired into the air some distance away.

Officers will arrest and jail anyone who is caught shooting a firearm into the air. In addition to being deadly, these shots disturb neighborhoods and divert police resources away from other crimes. During the last New Year’s holiday, Kansas City Police received 149 sounds of shots calls from 10 p.m. Dec. 31, 2011, to 5 a.m. Jan. 1, 2012.

“Firing a gun in city limits is against the law 365 days a year, and that includes New Year’s Eve,” Chief Darryl Forté said. “Residents should be able to celebrate the holiday safely and not be in fear of being struck by a stray bullet. Officers will be on the lookout for this illegal gunfire and will arrest perpetrators.”
at 2:34 PM

In May of this year, we and several partner agencies announced the creation of the Kansas City No Violence Alliance – or KC NoVA. Since that time, pieces are falling into place to significantly reduce the City’s violent crime in 2013. Repeat offenders who are all too familiar with the criminal justice system will see harsh legal consequences like never before because the system is going to work differently.

KC NoVA is a focused deterrence model similar to what has worked in other cities like Cincinnati and Boston. (Homicides fell by 47 percent in Cincinnati with this type of program.) It focuses law enforcement resources on the most violent offenders and groups while incorporating various systems of support to help lower-level offenders change their paths. Here in Kansas City, it incorporates municipal and federal law enforcement; local, state and federal prosecutors; Probation and Parole; the City; the juvenile justice system and academic research.

Here at KCPD, I have assigned a captain to oversee the project, as well as a sergeant and two detectives. But the whole department will be participating in gathering intelligence and identifying the worst perpetrators of crime in our city. The KC NoVA team is collocated with prosecutors in the Jackson County Prosecutor’s Office, and they are working with a research team at the University of Missouri Kansas City to analyze and diagram the city’s criminal networks, targeting the most central figures for swift and certain prosecution.

Those who are on the periphery of those networks and not as heavily involved in violent crime also will be targeted, but for different reasons. They will be offered social services to help them leave crime behind and become productive members of society. They will be assigned case managers who will assist them with things like anger management, life skills, job training, housing and transportation.

Many of these violent crime prevention efforts also begin with offenders re-entering the City after serving time in prison for violent offenses. We are partnering with Probation and Parole like never before. Just last week, a team of KCPD officers met with a man who had been in prison for 26 years and was getting out that day. The officers told him about the resources available to him for successfully re-entering society and let him know they would be checking on him regularly. He is going back to be surrounded by many of the same violent people he was when he committed the crime, but we hope these interventions will help him turn away from those negative influences.

Deterrence is KC NoVA’s ultimate goal. We hope to achieve this by cracking down very hard on the most violent offenders and giving lower-level offenders the tools they need to get away from a life of crime. I anticipate that you will see a significant reduction in homicides and aggravated assaults in 2013 and the years to come thanks to KC NoVA’s efforts. 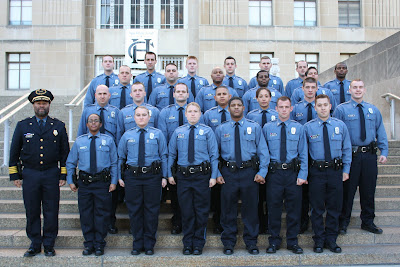 The 26 men and women of Entrant Officer Class 146 will graduate from the Police Academy tonight. They will hit the streets with their field training officers on Sunday. I administered the oath of office to them yesterday, on 12/12/12. In fact, I ended the oath by declaring them commissioned officers at exactly 12:12:12 (that was a stroke of luck).

Dozens of officers have retired this year, so this class is much needed. Our Academy does an excellent job preparing them for what they will face on the streets of Kansas City. You can see the sample curriculum. They receive extensive training in the law, patrol tactics, criminal investigation, firearms, defensive tactics, driving and more. These 26 men and women have proven themselves by successfully completing all the required training, and I look forward to having them represent KCPD.

Hot spot policing efforts have reduced homicides in Kansas City in 2012. So far, 40 percent of this year’s homicides have taken place in hot spot areas, compared to the 52 percent that took place in those areas on average for the past three years.

This does not mean crime is getting displaced elsewhere. Homicides are down across the board. We are at 101 homicides right now, which is seven fewer than last year, one more than in 2010, five fewer than 2009 and 22 fewer than 2008.

To reduce violent crime, we have to focus our efforts on where the bulk of it occurs. That’s what hot spot policing is all about. Channel 5 gave a great first-hand look at what this looks like with their special report last month.

I thank the officers, detectives, crime scene staff and others who are out solving and preventing these crimes. I also really want to thank the community members who are increasingly coming forward with tips and information. When a neighborhood no longer tolerates crime, it won’t happen there. We’re seeing that happen more and more, and police will continue to work on building the relationships that make safer neighborhoods.

Residents of south Kansas City now will go to a new location to file reports and conduct other business with police.


This past weekend, the new South Patrol Division at 9701 Marion Park Drive officially opened to the public. Residents should no longer go to the division’s former location at 11109 Hickman Mills Rd.

Police and public officials conducted a ribbon-cutting ceremony for the new South Patrol and Special Operations divisions’ campus on Nov. 7. Since then, contractors and computer technicians have put finishing touches on the buildings, and officers moved in throughout last week.

The campus is located near Bannister Road and 71 Highway, behind the Home Depot on Bannister. The entrance to the new South Patrol Division is on the west side of the western building, facing 71 Highway. Public parking is available in the west lot. The phone number to the station remains the same, 816-234-5550. Community group meeting facilities are available at the new location and can be reserved by calling the station.