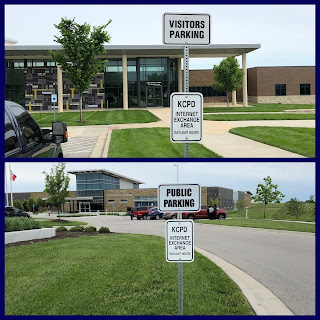 Facebook Marketplace, Craigslist, OfferUp, LetGo, – all offer a convenient way to buy and sell items with people nearby at a bargain. Sadly, it can also be an easy way for criminals to take advantage of unsuspecting victims. We’ve seen many cases of this, and that’s what prompted us to designate all of our patrol division parking lots as internet exchange zones.

Since the beginning of the year, we’ve had 19 robberies originating from online sales. They’ve been increasing in frequency, with six so far in May. Just this past Saturday, a victim agreed to meet someone through the LetGo app at a church parking lot in the 5500 block of Wayne to buy an iPhone 8s Plus. Two suspects got into the victims’ vehicle. They began to discuss price, but then one of them pulled a gun, threatened the victim, and took his money. Investigation is ongoing.

Last week, we put signage in each of our six patrol division station public parking lots designating them internet exchange zones during daylight hours. (You can find the patrol division nearest you on the front page of kcpd.org.) We wanted to provide a designated place with plenty of police presence for the public to conduct these transactions. Hundreds – maybe even thousands – of people are making these exchanges across Kansas City every day. Our mission statement is to protect and serve with professionalism, honor and integrity. We believe providing these safe internet exchange zones both protects residents and serves a growing demand for secure internet transaction spaces.

It also provides a great deterrent. If a buyer or seller is unwilling to meet you at a police station for the transaction, you should be very wary. Don’t sacrifice your safety for convenience or a lower price. Speaking of price, if it seems too good to be true, it probably is. No legitimate seller is offering the latest iPhone for $150. This is a common tactic used to lure victims to a robbery, and they will often use the price as an excuse for victims to meet them in a questionable location.

Buyers and sellers should keep all their communication about the transaction in the app they’re using and not give out their personal phone numbers. Users also should use the app to look at the profile of the buyer/seller: is it new? Verified? Avoid sites that offer total anonymity and no safeguards.

We also encourage people not to use cash for in-person transactions. If possible, use reputable apps to transfer money online. Carrying cash is a liability and could set you up to be the victim of a crime.

Hopefully, all these safety tips won’t even be needed if you’re meeting in one of our internet exchange zones. The idea is that they will attract only legitimate buyers and sellers. We’re also hoping that just proposing one of our police stations as a meeting place will put off anyone who had nefarious plans.

Even if you don’t choose our sites, choose some place safe. Don’t drive to places you’re unfamiliar with to make the exchange. Meet near the entrance or inside of a very public place or business with surveillance cameras and lots of foot traffic.

We can’t be everywhere to ensure safe transactions, but we’re hoping that by providing designated exchange areas, buyers and sellers can conduct business with fewer worries.

Send comments to kcpdchiefblog@kcpd.org.
at 10:32 AM

The Kansas City Missouri Police detective who took his own life in February was the fourth member of our Department to do so in as many years. His suicide was the first we discussed publicly because, as a Department, we decided it was time that we face this issue head-on.

We must stop treating police suicides like isolated incidents. More officers died by suicide in 2018 than in the line of duty. The rate of post-traumatic stress disorder and depression for police and firefighters is five times higher than the general population, according to research from the Ruderman Family Foundation. Yet only 10 percent of police departments have a suicide prevention program, according to PoliceOne.com.

I’d like to think we are a little ahead of the game at KCPD. We have an Employee Wellness Unit and are working toward implementing a peer support program. But more is needed. We need a dedicated mental health professional on staff. We need a psychiatrist who understands what first responders face, has expertise in treating them and can devote all of his or her professional time to the mental health care of Kansas City Missouri Police Department members. We work with medical doctors when our officers are physically hurt in the line of duty and arrange for their treatment. Treatment for mental illnesses that are duty-related deserves just as much priority. Officers cannot properly provide for the safety of our city if they are injured physically or mentally.

We do not have a place for a psychiatrist in our budget, unfortunately. That is why I was excited to see a bill being proposed by U.S. Sen. Josh Hawley called the Supporting and Treating Officers in Crisis Act of 2019. This legislation would grant up to $7 million for state and local law enforcement agencies to, among other things, offer counseling to law enforcement officers and their families. Other permitted uses for the funds include evidence-based suicide-prevention programs, specialized training for mental health and suicide prevention, and related support services.

Many major-city police departments have psychiatrists on staff. The Los Angeles Police Department has 17 of them, for example. While our department is not nearly as large, we are the largest law enforcement agency in Missouri, serving the state’s most populous city. Our officers face the unique stresses of policing an urban environment. These range from an increased risk of being confronted by an armed suspect to a high exposure to secondary trauma, commonly defined as the stress derived from helping others who are suffering or who have been traumatized.

There are KCPD detectives who investigate child pornography on a daily basis. Others listen to children who recount experiences of horrific abuse. Patrol officers and accident investigators come upon grizzly crash scenes. They must see the bodies of toddlers who were shot and killed playing with a firearm. They see devastated families regularly. They frequently encounter people who want to hurt or kill them. Then they go home to their own spouses and children and try to act like none of that affected them. It’s a heavy burden, and it’s one we hope to ease with the help of a KCPD psychiatrist.

The Supporting and Treating Officers in Crisis Act would provide the mechanism to make that happen. This is National Police Week, a time when the nation reflects upon the deadly sacrifices some officers have made while honoring the service of all law enforcement. We love hearing people say “thank you for your service,” but urging legislators to support this legislation would put those words into action.


This originally appeared as a guest commentary in the Kansas City Star on May 12, 2019.

Send comments to kcpdchiefblog@kcpd.org.
at 2:00 PM