We sometimes hear complaints that police don’t respond as quickly as people expect to certain types of incidents. The most common complaints are for calls about burglaries, car break-ins and non-injury accidents. We have a finite number of officers, so we must prioritize calls in which someone’s life or safety is at risk. Our policy very clearly outlines what types of calls receive priority, but here’s a little more succinct version that our dispatchers follow:

Priority 11 – 13: Calls where there is imminent danger to a person’s welfare (always lights and sirens on), send immediately

Priority 20: Calls where there is a potential danger to a person’s welfare (lights and sirens on if the incident is currently in progress), send within 2 minutes

Priority 30: Calls where the quality of the police response may be degraded if there is a delay, send within 5 minutes

Priority 40: Calls where a delay is acceptable

Priority 50: Calls where a delay of up to 4 hours is acceptable

Last month, July 2013, our median response time for Priority 10 calls (encompassing 10-13) was 7.42 minutes, and it was 9.78 minutes for Priority 20 calls. This is the time from the moment a 911 call is received to the moment an officer arrives on scene.

Consider this snapshot in time: at 10:15 a.m. on Tuesday, Aug. 20, there were 13 units (police cars manned by one or two officers) working in the Central Patrol Division. None were free to take any calls. All were tied up, responding to the following: two assaults, two injury crashes, a stabbing, investigating a suspicious person report, meeting an ambulance, meeting with someone who found a child reported missing and transporting an endangered person to a domestic violence shelter. Another had to testify in court. Two calls were in queue waiting to be dispatched whenever an officer became available. One was a 911 hang-up, and the other was a non-residential burglary.

Although it was a Priority 30 call that was to be dispatched within 5 minutes, the burglary caller had been waiting 65 minutes for police to arrive. I understand that person was probably frustrated. I know victims of property crimes often feel violated and scared, but it would be irresponsible for police to respond to their calls for service before a call in which someone’s safety is currently being threatened. It’s not because what happened to the burglary victim is not important, but like any organization, we must manage our resources as efficiently and responsibly as possible.


As we work to continue improving relationships with the community, it’s important that we keep expectations realistic. Police can’t always show up to non-emergency situations as soon as residents prefer, but we do our best to help those who need us most as quickly as possible.

Send comments to kcpdchiefblog@kcpd.org.
at 12:04 PM

Swearing in the newest KCPD officers

I was honored yesterday to swear in Kansas City's newest police officers. This group will graduate from the Police Academy in a formal ceremony tonight. They'll hit the streets for their first day of work on Sunday. 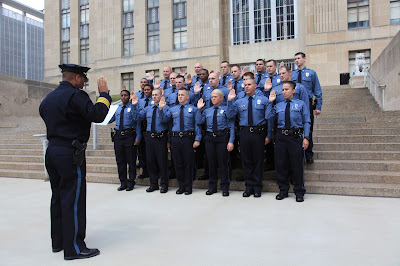 KC's homicide victims are getting older


You can see the full break down of year-to-date homicide statistics here. I don’t have an explanation for why the city’s homicide victims are getting older, but I do have a little hope. My hope is the younger generation is beginning to turn the corner – that they’re valuing life more and staying away from the high-risk lifestyles that lead to violence. I also hope they’re learning to manage their anger better. Of the known motives for homicide this year and every year, arguments are No. 1.

I ask for the community to continue building up our city’s youth. We’re doing everything we can to reduce violence, but police can’t instill the value of human life in children. That’s up to parents, families, neighbors, and the faith community. Encourage them to solve their problems without guns, and direct them on paths that improve their city. Talk about how important education is. As these pieces fall into place, we will see not just the homicide rate for youth drop, but fewer slayings overall.

You can read more about this trend in this Kansas City Star article from last month.

Send comments to kcpdchiefblog@kcpd.org.
at 1:23 PM