The Kansas City Regional Crime Lab staff are the behind-the-scenes folks on whom the burden of justice often rests. Their work puts perpetrators of violent and property crimes behind bars, thereby protecting our neighborhoods. They recently received an honor confirming what we already knew: they're among the best in the nation. The below is from our monthly Informant newsletter and describes what this honor means for Kansas City:

The Kansas City Regional Crime Lab has proved itself as one of the best in the nation after receiving a new breed of accreditation.

“For a local department, it’s a very impressive achievement to earn International Accreditation in all those disciplines,” ASCLD/LAB Executive Director John Neuner said.

The Kansas City Regional Crime Lab was previously accredited under ASCLD/LAB’s Legacy Program, but leaders wanted to take it to the next level. Neuner said the new level of accreditation is more stringent, has more requirements and is harder to achieve. It requires forensic laboratories to conform to standards that are in place for labs around the world, not just those agreed upon by American lab directors, as the old system did.

It took two years of work for the Kansas City Lab to earn the International Accreditation, said Lisa Dowler, the Lab’s Quality Assurance Manager. A group of staff members from every discipline met on a weekly basis to ensure the lab met every single standard. She said the process made them better.

“It makes us look at ourselves and look at our processes and how we can continually improve them,” she said.

She said the new standards are very customer-based, and their customers are several people in the judicial process: detectives, prosecutors, courts, attorneys and whoever gets their reports.

The process also had an impact on everyone at the Lab, from the scientists to the Building Operations and Property and Evidence technicians.

“It affected how we communicate with our customers, how we order supplies, how we check our instruments, word our reports, fix issues when they arise, how we set our goals and manage the laboratory,” she said. “So not only was the scientific staff affected, everyone was, from the Building Operations personnel that clean the labs to the administrative assistants and how they order our supplies for us.”

So why did everyone go to so much work for a piece of paper that grants International Accreditation for the next four years?

Ultimately, it’s to fight crime. When the Crime Lab presents evidence that is all but irrefutable, criminals go to prison and victims get justice.

“It’s a symbol for the people of Kansas City and the courts that a quality system exists within your lab, and you’ve demonstrated you’re following internationally recognized standards,” Neuner said. “It gives greater confidence in the quality of work coming out of the laboratory.” 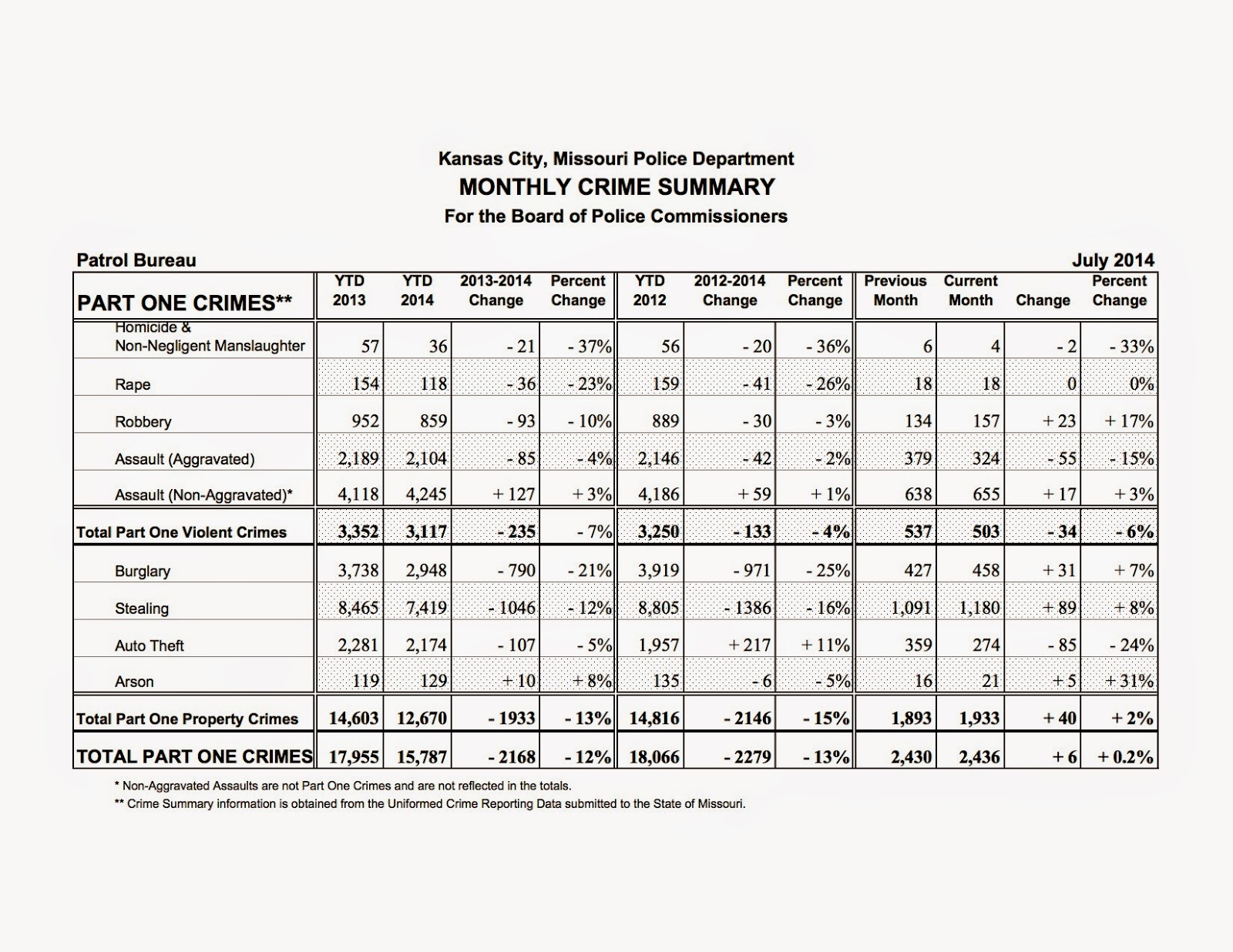 The statistics that will be presented to our Board of Police Commissioners tomorrow continue to show a significant decrease in crime compared to last year. These are above and have been certified by the state of Missouri for submission to the FBI (that process takes some time, which is why these numbers are through the end of July).

As of this morning, homicides are down by 31.5 percent compared to last year. In fact, this is the first significant reduction in homicides in the last 50 years. There are many things to which I could credit this, and I don’t claim to know all the reasons, but some of them are increased community cooperation with police, more neighborhoods that are refusing to tolerate crime, the Kansas City No Violence Alliance (KC NoVA), and the work our officers are doing every day to build trust and fight crime.

Take, for example, the work of our Violent Crimes Enforcement Unit. They are the enforcement arm of KC NoVA. Their job is to go after those who are at the nexus of violent criminal networks. So far this year, they have recovered 119 guns that were possessed illegally. They’ve also made 38 arrests for felons in possession of firearms (which carries a minimum federal prison sentence of five years with no parole) and 16 arrests for other federal firearm violations. They’ve also arrested 322 people wanted on state-level warrants and another 188 who were under investigation for serious (usually violent) crimes.

Crime is down in Kansas City, but it certainly is not eliminated. We continue to rely on the community to assist us. This assistance comes in any number of ways – from mentoring at-risk children to calling the TIPS Hotline. Continued efforts like those will lead to further crime reductions and safer neighborhoods.

Send comments to kcpdchiefblog@kcpd.org
at 12:39 PM

Reflecting on Sept. 11 and the importance of first responder relationships

I’m sure everyone who is reading this can remember where they were and what they were doing 13 years ago today. I was on the fifth floor of Headquarters serving as acting deputy chief of the Patrol Bureau because the regular deputy chief was on vacation that week. I was looking out the window when the first crash happened. There was a TV in my office, and I looked over and saw it.

There is so much to remember and reflect upon today, but one thing that keeps crossing my mind is how vital the relationships between first responders are. Police officers and firefighters were the ones rushing into the Twin Towers that day when everyone else was rushing away from them. They worked together to get thousands of people to safety. Sadly, hundreds of first responders lost their lives in their attempts to save the lives of others.

While Kansas City never has experienced anything near the scope of those attacks (and I pray we never will), our police officers, firefighters and paramedics enter dangerous situations all the time, often side by side. We are blessed to have two groups of professionals who work so well together in Kansas City.

Dozens and dozens of times each day, KCPD and KCFD join up to serve the people of Kansas City – at car wrecks, when someone has been assaulted, medical emergencies, arsons and so many more. A few weeks ago, we conducted joint active shooter training at City Hall. We know that both our departments would be called upon in such an emergency, and we are fortunate that we enjoy such a good relationship and can offer such a quick and professional response. I thank the members of both departments for all they do for the community.

Off the clock, there are many friendships and much camaraderie between members of our agencies. We donate to each other’s charitable causes and have supported each other through difficult budget times. Firefighters have even come to the aid of our officers when they were being assaulted. We have a solid relationship, and we are always ready to work for the good of the people of Kansas City.

Speaking of the public, we need you to continue to assist us. While today reminds me of the importance of first responders, it’s also a reminder that we must remain vigilant. Always be aware of your surroundings, and report any suspicious behavior you may see. The Kansas City Terrorism Early Warning Center’s web site offers some tips on what to look for. We appreciate your help in keeping our community safe.

Send comments to kcpdchiefblog@kcpd.org
at 5:15 PM

This morning I joined Mayor Sly James, Jackson County Prosecutor Jean Peters Baker, Kansas City Public Schools Superintendent Steven Green and others to speak out about the Missouri Legislature's attempt to override the veto of Senate Bill 656. We met in front of the mayor's childhood home at 44th and Montgall. My grandmother lived just around the corner, and she used to walk me to kindergarten down the street. It was a great neighborhood in which to grow up, and we'd like to make it that way again. This morning, Mayor James said SB 656 will only make our jobs harder. I'm proud of the mayor, prosecutor and everyone else for standing up to this bill.

Here are some of my comments from today's press conference:

Reducing violent crime in our city has been my top priority since I became police chief in 2011. This year, we’re beginning to see some real impact from our efforts and the efforts of our partners and the community. Homicides are down by a third compared to where they have been for the past 50 years.

But the fact remains that consistently 80 to 90 percent of murders in this city are perpetrated with guns. Getting those guns out of the hands of people who should not legally possess them is one of our department’s top priorities. Legislation like Senate Bill 656, however, will make our job more difficult.

We need to maintain the freedom to police our city in the way that works best for our residents. Senate Bill 656 would ban any open carry ordinances, which Kansas City enacted at the end of July. An open carry ban works for a densely populated area like our city.

Allowing open carry would increase calls for service to police, which would affect our response time to other emergency calls. Police chiefs and leaders of cities and towns throughout Missouri should be allowed to decide what will most effectively keep their residents safe. Senate Bill 656 does not allow us to do what we believe is in the best interest of Kansas Citians.