Kansas City, Mo., was, tragically, part of a national trend that saw a large increase in homicides in 2020. The KCPD, however, is doing everything to buck those trends. Our homicide rate dropped significantly in the fall, and our clearance rate for 2020 was well above the national average.

Not all the national data from 2020 have been compiled yet, but FBI statistics from the first nine months show that homicides were up 20.9 percent in America. In the nation’s 69 largest cities, homicides through Sept. 30, 2020, were up by 28.7%, according to the Major Cities Chiefs Association. Kansas City recorded 148 homicides in 2019 and 176 in 2020. That’s a 19% increase, which was below the national average in increased homicides. (Although right now the national average is composed of just the first nine months of 2020.)

But all the numbers do not ease the grief of anyone who lost a loved one to violence, and 2020 was, indeed, a record-setting homicide year in our city. That’s why we undertook many initiatives to combat the violence, such as assigning additional homicide and assault detectives and Operation LeGend – a 10-week influx of nearly 200 federal agents to help us solve violent crime cases and get the most violent offenders into custody.

Homicides fell significantly after Operation LeGend, which ran from mid-July to mid-September. You can see the monthly rate of homicides this year compared to the average over the past five years. We cannot definitively say Operation LeGend was the cause, but there was correlation. Before Operation LeGend, we were on pace to have more than 200 homicides in 2020. 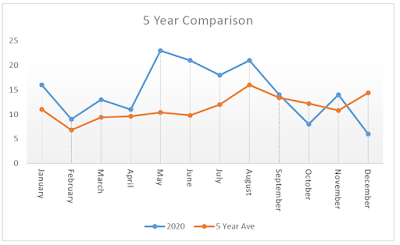 We also worked diligently to get justice for those who were killed. Based on the FBI’s Uniform Crime Rate (UCR) standard, our homicide clearance rate for 2020 was 73%. That’s up significantly from 2019, when it was 55%. The FBI reported that the national average homicide clearance rate was 61.4% in 2019, the most recent data available. It typically hovers in the low 60s. Despite a higher workload, our investigators were able to bring justice to the loved ones of 128 victims in 2020.

Our clearance rates go against national trends recently noted in the Wall Street Journal, showing that police in the United States have been clearing fewer murders during the pandemic.

Despite being below the national average for homicide increases, the increase was nonetheless devastating for our community. We had 1- and 4-year-old murder victims. Fathers, sons, brothers, mothers, sisters and daughters lost their lives to senseless violence, inflicting untold trauma on families.

The men and women of the Kansas City Missouri Police Department, alongside our community, local, state and federal partners, will do everything we can to prevent and solve these crimes. Operation LeGend left us with additional federal resources to stop gun crimes and more. As always, police cannot succeed in a vacuum, so we need the help of residents to make their neighborhoods safer. If you know something that can help us solve or prevent a violent crime, let the TIPS Hotline know at 816-474-TIPS (8477). You could even earn a $25,000 cash reward and stay anonymous.