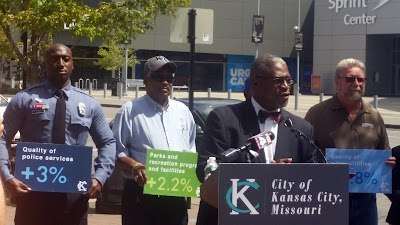 During intense scrutiny, a message for KCPD members

I shared the below message today with all the members of the Kansas City Missouri Police Department, and now I'd like to share it with everyone. I appreciate all the support our department has received from the community, and I look forward to continuing to build even stronger relationships between police and other members of the community. Here's the message that went out to KCPD members this morning:

I want to thank all department members again for their service in keeping our community safe. I am not the only one. In fact, most people appreciate what you do. They support you and want you to know how important you are to our community. Even Governor Jay Nixon said when he was at our Headquarters yesterday that he recognizes the difficulty of your job and what a valuable service you provide. He also said the Kansas City Missouri Police Department is a model that other law enforcement agencies in the state should follow.

Under the intense scrutiny law enforcement has faced, I continue to be proud of the dedication and professionalism the members of this department exhibit. This weekend will mark the first anniversary of the officer-involved shooting in Ferguson, Mo., that sparked so much of the police scrutiny. Negative attention on law enforcement in Kansas City and across the nation likely will come in media reports and from other sources. Do not be discouraged. I know our members are here to protect and serve with professionalism, honor and integrity, and we will continue to work with the community to make our city safe and strong.

Send comments to kcpdchiefblog@kcpd.org.
at 12:12 PM