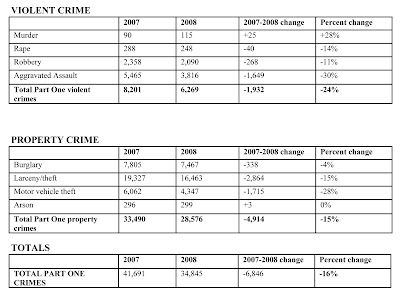 You wouldn’t know it by watching the news some days, but part one crimes in Kansas City fell by a double-digit percentage in 2008 – 16 percent. That's the lowest level in 12 years. Part one crimes include: murder, rape, robbery, aggravated assault, burglary, larceny/theft, auto theft and arson. Sadly, homicides were up by 28 percent, and we’re working day and night to address that. The fourth quarter of 2008 showed a 54 percent reduction in homicides from the third quarter, so we’re moving in the right direction.

But all other numbers were down. This is not a coincidence. The police department has painstakingly collected data to identify crime hot spots and then strategically attacked those problems. Put simply, Kansas City was safer in 2008 than it was in 2007. Above are the raw numbers from those two years. These have been reviewed and accepted by the state of Missouri. Click on the chart to see a bigger version.

E-mail comments to kcpdchiefblog@kcpd.org
at 2:55 PM