Impact of budget cuts on number of officers 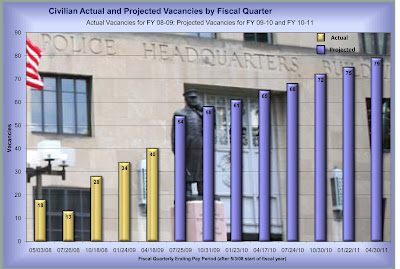 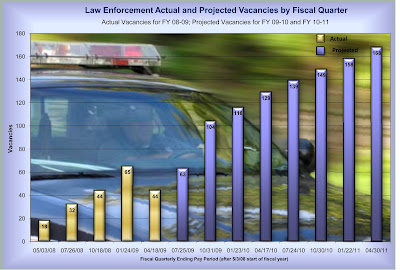 With our new budget, our police force will be reduced by 130 officers and 66 civilians by this time next year, based on historical attrition numbers. That’s the bottom line. And we have to have that many vacancies to stay within the budget. Our fiscal staff has prepared a report of actual and projected vacancies based on historical data. Those charts are above, and you can click on them to see a larger version.

Please note that these data make several assumptions. These include:
* The department getting no additional money for FY 2010 or 2011 in the form of grants or supplemental resources from the city. This would require us to lay off the 31 recruits currently in the police academy.
* That the general fund would remain at $175.6 million in 2011, as it is this year.
* That none of our costs go up (which is frankly a little unrealistic) for items such as health insurance, gasoline, etc.

If we do not have another police academy class in FY 2010, which our current budget will not allow us to, you can expect for none of these law enforcement vacancies to be filled until the beginning of 2012. It takes 11.5 months to hire and train a Kansas City Missouri Police officer before he or she is ready to hit the streets as a nonprobationary officer.

And if we lay off the 31 recruits currently in the police academy, we will be laying off our most diverse class ever. The members of this class mirror the community we serve more than any other in the history of this police department. But unless we can secure a federal grant that every other police department in the country also is trying to get, we can’t afford to keep them.

Don’t overlook the civilian vacancy chart, either. The fewer and fewer civilians we have, the more officers we will have to pull off the streets to do those jobs.
Send comments to kcpdchiefblog@kcpd.org
at 3:36 PM