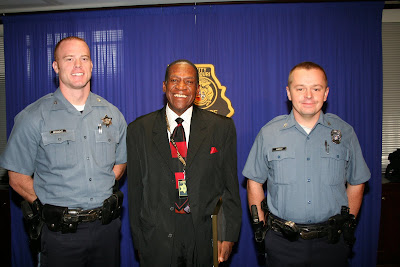 Today, the Department and Board of Police Commissioners presented a Certificate of Appreciation to Mr. Kenneth Ray for assisting two injured officers. Those officers were unconscious and didn't get to thank Mr. Ray until today. Their photo is above. Here's what happened:
At about 7:30 p.m. July 26, 2009, two Kansas City police officers were driving on Gregory with lights and sirens going to a disturbance call. As they crossed 71 Highway, a car failed to stop, and it struck the police car with great force.

Officer Sebastien Hanriot was driving, and he said the impact was brutal. He said, “Everything was crushing within the vehicle, and a lot of our equipment was flying and hitting us.” Officer Hanriot was conscious just long enough to radio dispatchers to tell them where he and his partner were and what happened, and then he passed out.

Unfortunately, two men were nearby who wanted to take advantage of the injured police officers and their wrecked vehicle. But luckily for police, Mr. Kenneth Ray was nearby, as well. He said he was about two blocks away when he heard the loud sound of the impact and came to the scene of the collision to see if he could help. When he got there, he saw two men reaching into the back of the patrol car. The men were trying to steal the officers’ duty equipment bags from the back seat while the officers were unconscious. Mr. Ray told the men to put the officers’ equipment back. The men initially said they were trying to help the injured officers, but when Mr. Ray confronted them, they ran away and left the officers’ things. If not for Mr. Ray, the men would have made off with the injured officers’ equipment.
at 4:06 PM