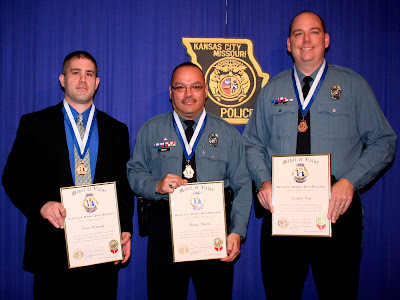 For the second time this year, I presented the department's highest honor to three very brave officers: (from left to right above) Travis Hennegin, Michael Merino and Brandon Pegg. Here's what they did:
At about 5 p.m. July 8, 2008, a car struck a tree at Oldham and Hillcrest roads in Swope Park. An off-duty officer in plain clothes went to see if she could help, only to be met by a 55-year-old man standing outside the wrecked sedan holding an assault rifle. She pointed her handgun at him and ordered him to drop his rifle.

Instead, the man took off southeast down Oldham, and he fired at at least three cars driving through the park. Fortunately, no one in the cars was hit, though all three vehicles had been struck by bullets. The off-duty officer called for back-up. Officers Travis Hennegin and Brandon Pegg soon arrived in one car, and Officer Michael Merino in another. They knew the man was shooting at random vehicles and that they could be putting themselves in the line of fire. When they got to the scene, they saw the suspect walking in the middle of Oldham with his gun.

Officers Hennegin and Pegg got out and took cover behind some trees. Officer Merino arrived and took cover west of them, being careful to avoid any potential crossfire situations. The officers converged on the suspect and ordered him to drop his weapon. After telling him to drop the gun several times, the suspect turned and fired a shot at Officer Hennegin. The bullet barely missed Officer Hennegin’s head and instead struck a tree he used for cover. All three officers immediately fired back at the suspect, fatally wounding him.

Sergeant John Blomquist said, “All three officers acted immediately and without hesitation when they were aware of an imminent threat of personal danger. They risked their lives knowing the suspect was armed and was an active shooter.”
Send comments to kcpdchiefblog@kcpd.org.
at 3:23 PM