September has started out as a deadly month in Kansas City with five homicides in the first eight days. There have been 78 homicides so far this year, compared to 83 at this time last year. Detectives are working hard to bring justice in these cases, but they need your help. If you have any information, you can share it anonymously through the TIPS Hotline at 816-474-TIPS (8477). You can even text a tip by texting "TIP452" plus your message to CRIMES (274637). Special software scrubs your phone number off of the text, so it too remains anonymous.

The latest homicide victim identified is 23-year-old Andrew Suttington. At about 9:48 p.m. Monday, Sept. 6, officers were dispatched to 28th and Highland on a cutting. When they got there, officers found Suttington in the street near the intersection. He was prounounced dead at the scene. A suspect has since turned himself in, and the case file has been given to the prosecutor's office. 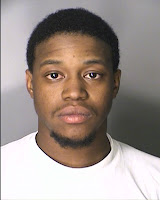 Suttington
Another homicide took place last night at 7007 Longview Road, and the victim has been identified as 29-year-old Darrel E. Wright Jr. of Kansas City, Mo. Officers were called to the address, an Express Mart, at about 10:57 p.m. yesterday, Sept. 7. They found Wright dead in the parking lot of the business. The man was with a woman who did not get shot. Two male suspects left in a vehicle. The victim and suspects were talking before the shooting, but police are still trying to figure out what led to the shooting. They're also trying to get more information on the suspects.
Wright
Send comments to kcpdchiefblog@kcpd.org
at 12:03 PM