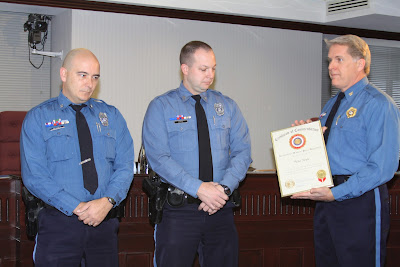 I presented Certificates of Commendation today to two North Patrol Division officers who went way beyond their normal duties to care for a couple that really needed help. Here's their story:
Officers J.D. Pettey and Philip Sipple knew there was more to an elderly couple’s troubles than met the eye.
The officers were called to the home of Mr. and Mrs. Cole nine times between January and May 2010. Every time, Mr. Cole was drunk. The officers noticed some items in the home that led them to believe Mr. Cole had been in the military, and they soon found out he was a World War II veteran. Through their Crisis Intervention Team training, Officers Pettey and Sipple thought Mr. Cole might be suffering from post traumatic stress disorder, or PTSD. They asked him and his wife questions about it, and both said Mr. Cole had talked to someone at the VA Hospital about it a long time ago. Mrs. Cole said her husband couldn’t even watch TV shows with guns or bombings.
Mrs. Cole also had a problem with hoarding. Officers found 15 carjacks in the couple’s yard, 100 small flashlights and many more items packing the house. The couple agreed to get treatment for their mental health problems but said they couldn’t afford much. The officers got Mr. Cole enrolled in a PTSD support group at the VA Hospital for free. They also worked with the Division of Aging to get the couple discounted groceries and free professional help for their hoarding problem.
The officers did most of those things at work, but they used their off-duty time to help the Coles, too. They helped them clean up their home and removed a half-ton of recyclable material. They sold the recyclables and gave the money to the Coles. Officers Pettey and Sipple also arranged for NTB to donate their time and labor to remove many old wheels and tires from the Coles’ yard, and the officers helped them pull out a vehicle that had been stuck in the mud. The officers got the Coles back in touch with their old church, who agreed to help them with future needs. Officer Pettey even brought his wife, Officer Tina Pettey, on board to help Mrs. Cole organize her pictures, which helped the woman with her hoarding.
Police have not been called to the Coles’ home since the officers’ intervention.
Great work, Officers.

Send comments to kcpdchiefblog@kcpd.org.
at 12:36 PM