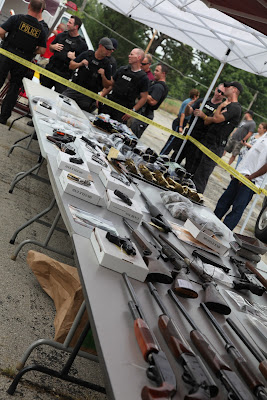 Some of the drugs and guns recovered during the Violent Crime Initiative.
An effort led by Kansas City Police put close to 200 law enforcement officers in the most violent areas of the city for three days to attack violent crime.

Running from Aug. 3 to 5, this year’s violent crime initiative followed up and expanded on the success of those in previous years. This year, KCPD and Independence Police officers, as well as agents from seven federal agencies, obtained search warrants for 50 addresses – the most ever – in the East, Central and Metro patrol divisions. Each of those divisions also provided input about problem locations and individuals to assist in the overall effort of suppressing violent crimes in these designated areas during this initiative.

This year’s initiative was conducted in two parts. The first part took place Wednesday and Thursday as officers executed 50 search warrants and many more arrest warrants.

The final results of the first phase are:

Police will conduct a similar operation in the suburban patrol divisions (North, Shoal Creek and South) in the coming months.

Part two of the three-day initiative involves the 200-plus officers and agents involved in the operation going door-to-door in neighborhoods today to get new leads on five unsolved homicide cases. Their work today already has developed additional information in several of the investigations. The cases for which they’re pursuing tips are:

• Marshall Blacksure: 26-year-old Blacksure was found shot to death on the sidewalk at Roberts and Bales at about 8 p.m. June 22, 2011. A second shooting victim arrived at a local hospital about 20 minutes later saying he was shot in the arm at the same location as Blacksure. Witnesses said a red Chevy Camaro fled the scene immediately after the shooting. 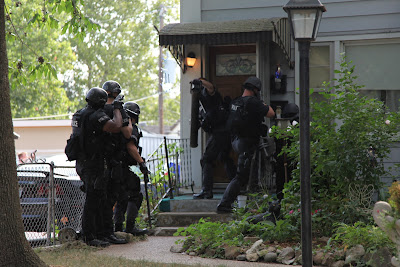 Send comments to kcpdchiefblog@kcpd.org.
at 3:05 PM