The Kansas City Police Department has a long, and at times, tragic history. The Trail of Heroes was created to remember and honor those who have given their lives in the service of this city. Sometimes it's heartening when someone takes the time and resources to honor someone who many have forgotten about. That was the case this past New Year's Day. Check out the story about it in our January Informant newsletter. 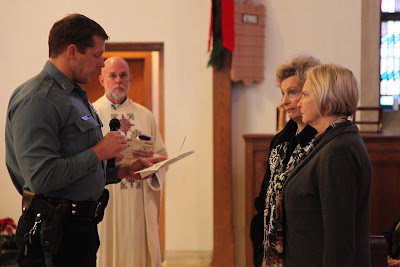 A bench on the Trail of Heroes – funded by an anonymous donor – was dedicated to an officer who was shot and killed in the line of duty 88 years ago this past New Year’s Day.

Sergeant Dennis Whalen was shot on New Year’s Eve 1923 and died in the hospital on New Year’s Day 1924 after attempting to arrest suspects in the death of another officer killed in 1913.

According to the Police Memorial web site, it all started with two suspects wanted for killing KCPD Patrolman Homer Riggle on Feb. 20, 1913. Patrolman Riggle was shot and killed by two robbery suspects who overpowered him during an arrest and killed him with his own weapon. Three months later on April 30, 1913, Officer Andrew Lynch was in a pharmacy at 9th street and Benton Boulevard when he recognized the suspects. The two men, John Tatman and Samuel Sherman, fled. Officer Lynch chased them and a running gun battle broke out. Lynch was shot five times. He died five days later of his wounds. He had been on the department just six years and was 38 years old. That same day in April 1913, Sergeant Dennis Whalen was responsible for capturing the two men who killed Officer Andrew Lynch and Patrolman Homer Riggle.

Eleven years later, Sgt. Whalen was shot at age 57 by a bandit at 1549 East 18th street and died New Year’s Day 1924. Some sources say the man who killed him was an additional suspect wanted in the murders of Patrolman Riggle and Officer Lynch.

Sergeant Dennis Whalen joined the police department in 1889. Throughout his 34-year career, he served as a beat patrolman, a special guard, and an executive officer.

It is known, after Sgt. Whalen’s death, his wife Anna Whalen gathered all the gold and silver jewelry Dennis had given her over the years and had it melted into a chalice in honor of him. Years later, that same chalice was found at St. Therese Little Flower Parish at 58th and Euclid with an engraving on the bottom saying, “In loving memory of Dennis Whalen, by his wife Anna Whalen.”

A Catholic Mass and Memorial was held for Sgt. Dennis Whalen and to honor those who put their lives in danger for others on January 1, 2012 at St. Therese Little Flower Parish. Sgt. Whalen and Ann’s great- nieces, sisters MaryBeth Daigneaux and Margaret Ann Frick, said they were honored to receive the letter that Officer Dennis Coates read, stating that a bench from the Kansas City Missouri Police Department’s Trail of Heroes was anonymously dedicated in his name.

Mike Arndt, Operations Manager, said, “Sgt. Whalen’s bench will be the 11th bench honoring those who have died in the line of duty and the 21st bench overall.”

Send comments to kcpdchiefblog@kcpd.org
at 3:17 PM