As many of you have heard, Ford has stopped producing the Crown Victoria - the American police car standard. Nearly every law enforcement agency in the nation now is faced with choosing what kind of vehicles to purchase next, and this story from our February Informant newsletter explains how KCPD will go about our decision. See pictures of the contenders at the end of the article:

KCPD will purchase 6 to 12 cars each of the following types of vehicles in the 2012-13 fiscal year: Dodge Charger Pursuits, Ford Interceptor Sedans, Ford Interceptor Sport Utility Vehicles, Police Package Chevrolet Tahoes and Police Package Chevrolet Caprices. The department already has at least one Charger, Tahoe and Caprice for testing. The new Ford products just went into production in January.

“We need to find out what works best for our agency,” said Captain Don Sight, commander of the Fleet Operations Unit.

When Ford stopped making their iconic police cruiser in 2011, law enforcement agencies across the country were left to make a decision about what to replace them with. Other automobile manufacturers saw this as an opportunity to jump into the police car market. Sight said it wouldn’t be prudent to pick just one type of car right now to replace KCPD’s fleet of 502 patrol cars, most of which are Crown Victorias.

Sight said the department also needs to learn how the cars do in a variety of weather conditions.

“We have all four seasons here,” he said.

All vehicles being tested will have traction control, which Sight said will give them better winter performance than Crown Victorias. The two Ford vehicles are all-wheel drive. The others are rear-wheel drive.

Fleet Operations will carefully study the cost per mile of each type of vehicle, a figure that entails fuel usage, maintenance costs and more. They also plan to solicit a lot of input from the officers who will drive the cars.

Fleet Supervisor Darrell Cooper said the new models could start getting deployed in late March, early April. Many will go to officers in the three urban patrol divisions to better test how they hold up to city driving. One of each also will go to the Drivers Training Section at the Academy.

KCPD has driven the Crown Vic almost exclusively for the last 20 years. Captain Sight said citizens will have to adjust to seeing a new style of police car on the road, just as they did when the department switched from Dodge Diplomats/Plymouth Gran Furies to the Crown Victoria in the 1980s. But some things will remain the same. The cars will still be navy colored and will feature “Police KCMO” door graphics similar to current models, although Cooper said the graphics are going to get some tweaking.

Fleet Supervisor Mark Crawford said there will undoubtedly be a learning curve for KCPD’s mechanics, most of whom have serviced primarily Crown Victorias for two decades and will have to learn five new types of vehicles. But he doesn’t expect the curve to be that steep because the technicians already work on a variety of specialty and leased vehicles.

Captain Sight said it could be several years before KCPD decides on one type of vehicle.

“Hopefully something will stand out,” he said. 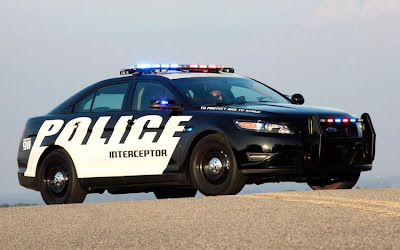 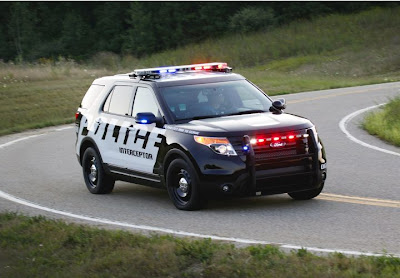 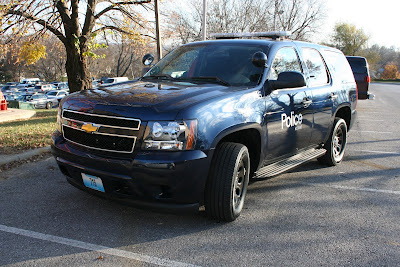 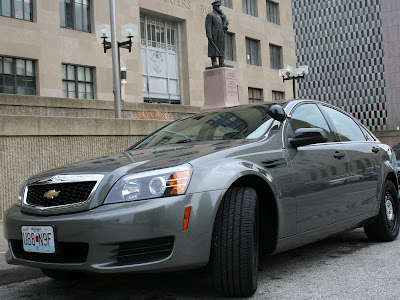 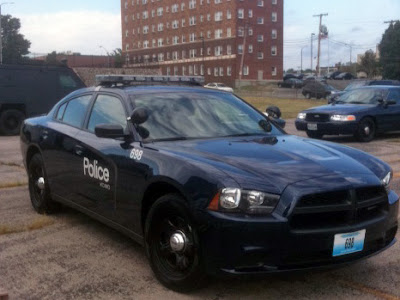 The Dodge Charger Pursuit
at 12:21 PM