We live in a remarkable city.

Kansas City provides the best of everything – food, music, culture, and friendliness. Together, all of us contribute to making Kansas City special and envied.

While it’s world-class (thank you, World Cup), it’s not perfect. There's too much violent crime. Any violence is too much, really, but we have more than we should. When I became Interim Police Chief in April, I said that the Kansas City Missouri Police Department would focus on reducing violent crime and strengthening community relationships.

In May, we joined KC 360. This is a pilot program currently taking place in the Santa Fe and Oak Park neighborhoods. It is modeled after Omaha 360, which experienced a 74% drop in gun violence from 2008 to 2018.

Omaha 360 has been successful in working with community partners in the areas of prevention, intervention, and community engagement. The result has been a large decrease in gun and gang violence.

In this pilot program, we are listening to what these communities want. So far, they have said they want data. We’re providing lots of it, along with specific maps that show the areas with the most problems. In turn, community partners are intervening by providing services and counseling to those that might need it. Think victims, witnesses, or even neighbors experiencing trauma.

We are thankful to KC Common Good which has helped spearhead this program. They’ve connected us with partners such as the Mattie Rhodes Center, AdHoc Group Against Crime, and others wanting to improve the quality of life in Kansas City.

This May, the Jackson County Prosecutor’s Office came up with a new idea – custom notifications – and invited KCPD us to take part.

Picture a “reset” button for someone heading towards a life of violence. Except, there’s no button, but a knock at the door. With community partners, we’ve started showing up in person to offer alternatives and resources (such as social workers) to violence.

Sometimes the person answering the door is the person at risk of committing violence. Sometimes, it's a loved one. Our message is the same: with help and support, you can change your life.

Who is receiving the custom notification? Someone whose family member has called us. They called because they fear for their relative and want help. Sometimes, our violent crime intelligence units identify people at risk for this lifestyle. To be clear, we’re trying to help. But we will enforce the law when broken.

To help prevent violence, our patrol division Impact Squads now monitor violent crime hot spots that are identified by ongoing crime analysis. The analysis and deployment of the squads are meant to place officers in the right spot at the right time. The squads also have the flexibility to assist with 911 calls to help ensure the fastest possible response time on emergency calls.

We review each shooting, both fatal and non-fatal, in Kansas City weekly, sharing intelligence. Now, we also review select attempted shootings where the suspect(s) fired and missed, but the risk for retaliation is high. Identifying suspects in these attempted shootings is important as a prevention measure. This is vital and is now reviewed weekly as well.

We know we have much work to do. It’s my hope you know that we’re doing it.

We will continue to recalibrate, innovate, and partner with others to reduce violence in Kansas City. All of us deserve to live safely in our great city. 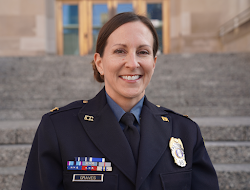