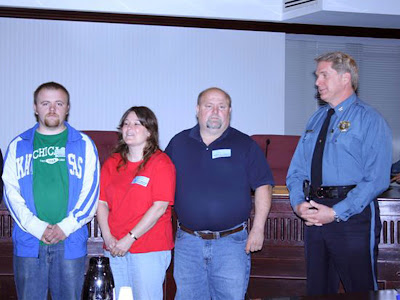 Today we gave Certificates of Appreciation to the Sosebee family. They assisted the police department in a remarkable way, and any of us would be lucky to have them as our neighbors. Here's their story:
On January 27, 2009, the Sosebee family saw four unknown people leaving a neighbor’s house with electronics in their neighborhood near the Truman Sports Complex. James Sosebee informed his wife and son, Barbara and John Sosebee, that he thought the three male and one female suspects were committing a burglary. His family agreed, and they saw the suspects get in a white Ford Crown Victoria and drive away. All three of the Sosebees got into their family van with John driving to follow the suspects’ car to obtain a license plate number and get a better description of the suspects.

As they approached 39th and Denton streets, the suspects abruptly stopped, and one person got out and began firing shots at the Sosebees. To avoid being hit by the gunfire, John Sosebee turned his van off the road and crashed it into a ditch. The Sosebees thought the suspects had left the area, but when John Sosebee looked out the window to confirm it, the suspects fired on the family again while they were stuck helpless in their wrecked vehicle. Barbara Sosebee was seriously injured from the accident, and John Sosebee had minor head injuries. No one was hit by the six to seven shots the suspects had fired.

Despite the trauma, the Sosebees were able to give officers an accurate description of the suspects’ car and a partial license plate number. The next day, officers found a vehicle matching their description. Officers lost sight of it but later found it abandoned. Evidence found inside of the car led officers to a house where two suspects were taken into custody. Inside the house, officers discovered two guns and thousands of dollars worth of stolen property from multiple burglaries. One suspect was interviewed and confessed to being involved in the burglary and assault, and he was charged accordingly. Two other suspects were apprehended and charged in juvenile court.

Sergeant Keith Ericsson said the actions of the Sosebee family were vital in capturing the suspects in this incident and leading detectives to resolve numerous other burglaries in which the suspects had been involved.

Sergeant Ericsson said, “Not only did the Sosebee family sustain major damage to their family car during the incident, but they put their lives in harm’s way to help a neighbor.”
Send comments to kcpdchiefblog@kcpd.org
at 11:40 AM