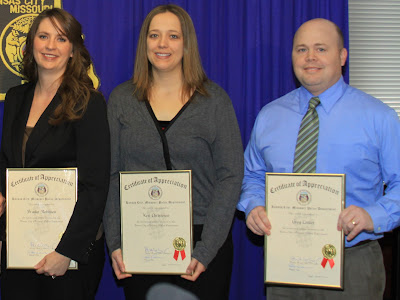 Pictured from left are Brooke Robinson of Target and Keri Christeson and Greg Leiker of CVS
In the past year, we've busted some major retail theft rings. These busts don't happen without the cooperation of the retailers involved, and today we honored some people from CVS and Target who went out of their way to help us stop a mother-and-son team of thieves. Here's what they and the detectives did:

On May 3, 2010, Detectives Chad Herriman and Tod Reaves learned from an informant that she was stealing thousands of dollars in health and beauty care products and supplying it to a man and his mother, who were then reselling the items at swap-and-shops and flea markets. The source said the man and his mother made lists of what they wanted her and other boosters to steal – everything from nail polish to detergent. The group would steal the requested items and sell them to the mother and son for pennies on the dollar.

Detectives Herriman and Reaves went under-cover and arranged five controlled sales with the mother-son thieves using purportedly stolen merchandise that was in fact donated by CVS and Target. Detectives Herriman and Reaves posed as boosters, and in their under-cover role, sold more than $6,800 worth of merchandise to the mother and son. They were paid $990 for these items. Detectives recorded each controlled sale and used Tactical Response Teams as take-down crews.

Once enough evidence was gathered, police got search warrants for the suspect’s homes and businesses. They found more than 24,300 items of stolen merchandise worth more than $177,000. The son claimed he had paid out more than $720,000 in the last year to boosters, and he said he paid them about 20% of the value of the items.

Sergeant Michael Foster said Detectives Herriman and Reaves identified and stopped a fencing operation that was costing the local economy a great deal. He said they were directly responsible for gathering information, maintaining confidential sources and coordinating with CVS and Target for controlled buys. Likewise, Sergeant Foster said solving the whole case would not have happened without the cooperation of Greg Leiker and Keri Christeson of CVS and Brooke Robinson and Mike Gudgell of Target.

He said, “Without their participation or donations, this case would not have been possible.”

Nor would the case have been solved without the long hours the Central Patrol Property Crimes Section and TRT 1 spent conducting surveillance, maintaining logs, documenting controlled sales, executing search warrants and recovering and documenting more than 24,000 pieces of property.

Channel 41 did a nice piece on this particular theft ring when we served the search warrants in July, and you can watch their video here.

Send comments to kcpdchiefblog@kcpd.org.
at 3:10 PM