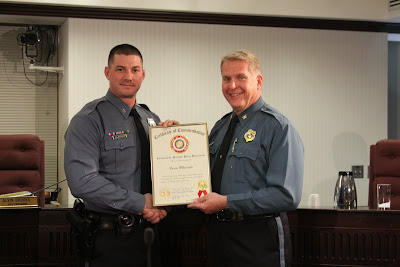 I presented a Certificate of Commendation today to Officer Brian Wilkerson. He did a very brave thing, and here's his story:


Officer Brian Wilkerson wasn’t even on duty when he risked his own life to save a woman hurt in a bad car wreck.

Just before 3 a.m. Nov. 25, 2010, Officer Wilkerson was on his way home from his shift when he saw a car turned over on its side at 31st and Michigan. He stopped and heard a woman inside screaming for help. He saw fuel leaking onto the ground and pooling by the driver’s side door and was concerned that it could ignite at any moment. He also saw the driver trapped inside the vehicle. Officer Wilkerson climbed onto the car and broke out the passenger window to get inside. He climbed through the vehicle and pulled the woman out of the car. He then helped her get a good distance away from the car in case it caught fire. He had her lie down and started precautionary medical procedures while waiting for an ambulance to arrive. The woman recovered from her injuries.
Send comments to kcpdchiefblog@kcpd.org.
at 1:55 PM