Officers do fantastic job getting illegal firearms off streets 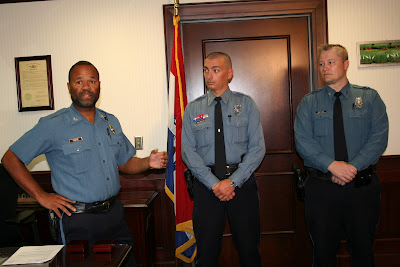 Today I recognized two officers who have really dedicated themselves to making the community they serve a safer place. I presented the Chief’s Coin to Officers Bryan Britten and Michael Holsworth of the East Patrol Division this afternoon. The Coin is given at the Chief’s discretion, and I have awarded only one other one in my ten months on the job.

On their own, Officers Britten and Holsworth initiated a gun suppression project in the East Patrol Division inside what would later be designated as a crime hot spot in our hot spot policing initiative. They already knew that neighborhood needed attention (I’m not identifying it so as not to let criminals know where we’re concentrating our efforts). In one year, the officers recovered 18 firearms within their self-designated project area as well as 27 in the rest of their sector for a total of 45 firearms recovered. This is unheard of. Our Crime Lab later linked one of the weapons they seized to two homicides. The investigation into those is still ongoing, so I can’t say more at this time, but this piece of evidence will be vital.

The officers said they did this by “knowing their bad guys.” They did a great job targeting those who were involved in criminal activity and getting them and their weapons off the streets. Most of the people in these neighborhoods are law-abiding citizens, but the few who engage in criminal activity make the whole community unsafe. Thanks to proactive officers like Bryan Britten and Michael Holsworth, community members’ sense of security can begin to return.

Watch more about these officers on KCTV Channel 5.

Send comments to kcpdchiefblog@kcpd.org.
at 9:08 PM