KCPD and security for the NAACP convention 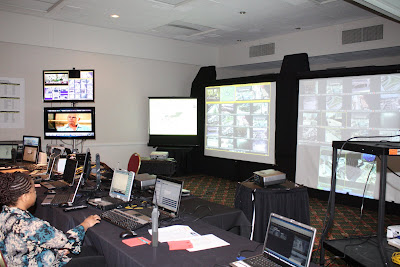 As I’m sure you’ve heard, Kansas City is playing host to the national NAACP convention this week. First Lady Michelle Obama spoke at the convention today, and activities have been going on since last week and will conclude on Thursday. Along with the 7,000 to 10,000 people who were expected to attend the convention, there’s also an increased police presence around Bartle Hall, both seen and unseen.
Like other major events that bring a lot of visitors to town, KCPD has been planning for this convention for some time. About 90 officers a day are assigned specifically to this event. They’re in the convention areas and out on foot, ATV, cars and other means. They made certain the many youth who participated in academic competitions last week were safe, and they’re continuing to do so for all attendees this week. Although it’s not officially part of their duty, they’ve also been unofficial city ambassadors – giving people directions, telling them where to find food and the like. Several attendees have told the incident commander of the convention, Captain Floyd Mitchell, how nice everyone has been and how much they like Kansas City.
Police have a big presence behind the scenes, too. A 24/7 command post has been set up in the Marriott Muehlbach tower so police can monitor multiple locations by camera. They can view video from 40 cameras at a time, but with the flick of a switch, they have access to 200 total cameras. That command post is pictured above. An example of how amazing these cameras are happened today as First Lady Obama was making her way into Downtown from the Downtown Airport. Officers watching the camera feeds noticed a man on top of a tall building a few blocks off of Michelle Obama’s motorcade route. Concerned, they zoomed in close enough that they could see the man was wearing a badge from an air-conditioning repair company and was working on the building’s air conditioner and thus determined he didn’t pose a threat to the first lady. Police, did however, continue to monitor him while the first lady was nearby.
The cameras also help direct officers on the ground to any kind of incident or traffic tie-up that might be taking place. Fortunately, Capt. Mitchell reports that there have been no major incidents, and the NAACP convention is going very smoothly.

Rest assured that the rest of the city is receiving no less protection because of the convention. A majority of the officers working there are on special assignment and have not been pulled away from their regular duties. As always, KCPD is dedicated to protecting those who live, work and visit here.

Send comments to kcpdchiefblog@kcpd.org
at 3:31 PM