One of our Department’s critical values is innovation, and we’re looking at an intriguing new way to predict where crime will happen using technology we already have. The method is called Risk Terrain Modeling, and we first learned about it through a study three professors at the Rutgers University Center on Public Security published in October 2009.
One of those professors, Dr. Joel Caplan, helped teach our officers how to do Risk Terrain Modeling (RTM). We will use RTM as part of a larger crime reduction pilot project in the South Patrol Division. RTM will attempt to predict where crime will happen and then address it before it does. RTM uses crime-mapping software we already have but takes it to another level. Instead of just including historical information about crime hotspots, it incorporates a variety of other factors (like vacant buildings, where parolees live, or almost any other factor you could think of) to create a map that highlights areas at highest risk for crime.
For example, say we’re trying to predict the next offense in a series of convenience store robberies. We would map the data about past robberies that we already have, but then we’d also map the locations of all convenience stores. We could even highlight those that have ATMs. Put those maps together, and we would come up with a map that helps predict possible robbery targets. We could also include mitigating factors in these maps. We could determine which convenience stores have security guards or really good theft prevention measures, and their risk would likely fall, and that would be reflected in the map.

Here is an example of RTM at work. The top map shows historic violent crime data in an area of south Kansas City. The RTM created for the map below included specific environmental factors for certain types of violent crime. As you can see, when compared to the single violent crime density layer the RTM highlights smaller, more specific areas where the types of violent crime addressed by the RTM are likely to take place in the future. Another RTM created for the same geographic area may highlight other areas based on the type(s) of crime and environmental factors included in the RTM. 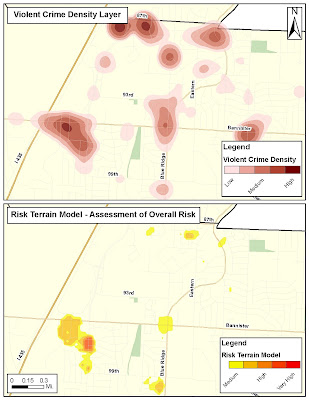 Risk Terrain Modeling could drastically change the way we deploy officers. They would still respond to 911 calls, of course, but their proactive work would be very different. Instead of patrolling geographically determined beats, they would patrol where problems are most likely to occur – areas of highest “risk.” We have limited resources, and we hope RTM will direct officers to where they’re most needed. It also will encourage officers to propose specific strategies to address problems in the areas they serve. (In the convenience store example above, police would heavily patrol around stores most likely to be hit by robbers and talk with store managers about theft prevention measures.)

We think RTM could identify many problems – some of which are beyond police authority – like codes problems, absentee landlords and the like. Ideally, once police identify these issues, everyone else in the community – government agencies and politicians, neighbors, churches, schools, businesses, etc. – can step up to help address the underlying problems that are breeding crime.

Of course no map will be able to predict every crime. It’s a relatively new technique, and like I mentioned, we will begin testing it in the South Patrol Division. Training for staff and officers there will commence soon. RTM could prove to be a very valuable tool in stopping crime before it starts in Kansas City.

You can click on the picture below to see how maps of different datasets come together to form an RTM.

Send comments to kcpdchiefblog@kcpd.org
at 1:39 PM