Check out progess on the new Metro Patrol Station 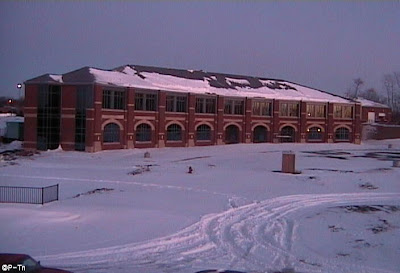 Despite the bad weather, construction on our new Metro Patrol Division station is coming right along. The above picture was taken on Monday, and you can watch the daily construction progress by webcam, too. (Though from Dec. 24 to 26, the camera was mostly covered with snow.) The webcam site also has archived pictures, so you can see how far the building has come.
At last week's Board of Police Commissioners Meeting, Eric Bosch, director of the City's Capital Improvements Management Office, reported the new station is completely walled in and heated. Work is under way right now on interior things like plumbing, wiring and drywall. The anticipated opening date for the new station is summer 2010.
The new Metro Patrol Division station is located on the site of the old Fairy Land Park near 75th and Prospect. Its construction is funded by the quarter-cent Public Safety Capital Improvements Sales Tax that Kansas City voters approved in 2002. The new site and building will allow police to respond to citizens' needs more quickly and provide a more workable space for officers.
Send comments to kcpdchiefblog@kcpd.org.
at 11:27 AM