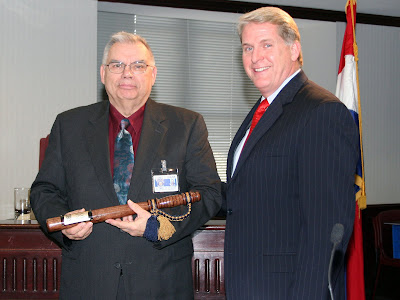 If anyone represents the spirit of dedication and commitment to the residents of Kansas City we strive for, it's Buddy Hockett. Today, I presented a ceremonial baton and the Meritorious Service Award to Mr. Hockett, who has served this police department for an astounding 45 years. In fact, we think he's the longest-serving member in the 135-year history of KCPD.

Mr. Hockett joined KCPD as an officer in 1962. By state statute, he had to retire after 30 years of service in 1992. But in 1994, he returned to the department to work as a civilian. Since then, he has worked as a dispatcher, telephone service officer and in the Data Entry Section. Mr. Hockett is the only known person to have worked as a dispatcher as both an officer and a civilian. The position used to be staffed by sworn officers. Mr. Hockett retired from KCPD for the second time on Dec. 18.
I thank Buddy for how much he has given to this police department and this city, and we wish him well in his retirement.
Send comments to kcpdchiefblog@kcpd.org
at 1:58 PM