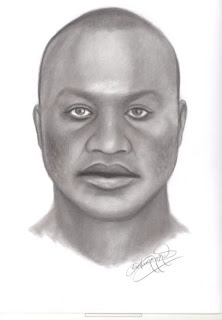 Kansas City Police have released a composite sketch of a suspected serial rapist, based on victims’ description of him.

Victims have been working with a forensic sketch artist and detectives to produce this sketch. They have described the suspect as a black male who is about 6 feet tall and weighs 250 pounds. He is bald and has pitted cheeks, possibly from acne scars. The victims said he had a deep, smooth voice and that he had very bad breath and smelled of exhaust fumes.

Police urge anyone with information about the suspect to come forward by calling police or the TIPS Hotline at 816-474-TIPS.

Please note: A composite is not a portrait of one person, but a grouping of characteristics to put people into a category that narrows the search and eliminates other groups. It is intended to place the focus on a smaller grouping of individuals.
at 10:22 AM