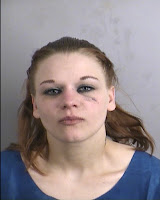 At about 10:22 p.m. Tuesday, Feb. 23, officers were in the area of Truman and Indiana when their police vehicle was nearly struck by a small sport utility vehicle. The officers tried to stop the vehicle, but the driver, now identified as 19-year-old Jessica D. Jones of Kansas City, Kan., refused to stop. Believing the vehicle presented a danger to the public because of unsafe driving, the officers pursued the SUV to the area of 31st and Terrace. Jones turned south on Terrace from 31st Street, stopping in a dead end. The officers exited their vehicles, and Jones turned around and began to drive at the officers. The officers shot at Jones and killed her.
Jones was the sole occupant of the vehicle. Four officers shot at the car. No officer was injured. They are on routine administrative leave while the shooting is investigated.
Detectives have discovered that the SUV Jones was driving had been stolen from Overland Park, Kan. The investigation into the incident is ongoing.
Send comments to kcpdchiefblog@kcpd.org
at 9:00 AM