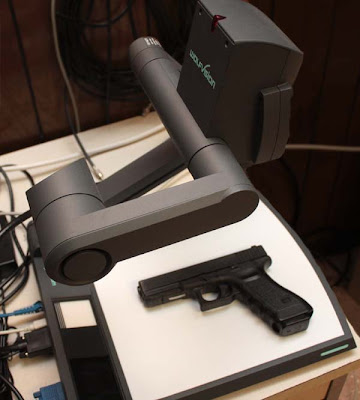 Another interesting story from this month's Informant newsletter discusses the recent technological advances that are bringing our Crime Lab personnel in on regular briefings and discussions about homicide cases. Ultimately, this should lead to solving more cases more quickly. Here's the story:

The distance from KCPD’s headquarters and the Regional Crime Lab is a lot shorter now, thanks to the new video-conferencing technology just installed in both locations.
When a homicide squad meets to discuss a case, a lab technician will now be able to participate right alongside the squad at Headquarters. The advantage is more than just the savings in travel time.
“Now we can have two-way visual and audio contact virtually at any time with the lab experts,” Homicide Sergeant Dave Bernard said “We also each have Visualizers.”
The Visualizer is a high-resolution device that allows the distant viewer at the lab to see documents and evidence in real time, just as the squad does. The lab technician could instruct a member of the homicide squad to pick up, rotate or turn over a piece of evidence, allowing the technician to examine it as if he or she were there.
The 2007 Edward Byrne Memorial Justice Assistance Grant provided the funding for the video conferencing equipment in Violent Crimes and the Lab. The system involved the purchase of a 52” Plasma TV, two laptops, the two Visualizers, software and networking. The cost was just over $22,000.

Homicide Sergeant Barb Eckert hasn’t had a chance to use the new system yet.
“I’m anxious to see if it has the same feel as it does when you are sitting down in the same room with a person from the lab,” Sergeant Eckert said.
Once they mastered the operation of the equipment, the video-conferencing has become as natural to homicide detectives as any of their previous briefings before the addition of the lab. There’s no need to present to the camera as the camera captures the entire space. The lab technician simply becomes another person in the room.
After a couple of practice rounds, the squad was ready to do a live briefing.
“Even during the practice rounds, we were able to tell the lab personnel what to look for in the evidence recovered and how it relates to the crime,” Sergeant Bernard said.
The lab personnel, in turn, made suggestions on how to accomplish things that would facilitate their testing.
“I think it will be an effective tool once we get used to it,” Homicide Sergeant Keith Kirchhoff said. “I’m looking forward to the enhanced communication with the crime lab.”
Members of the Homicide Unit hope having the lab involved in such a personal and interactive way will be more than a convenience, but rather a way to improve investigations leading to quicker arrests.
Send comments to kcpdchiefblog@kcpd.org
at 3:29 PM