Officer devotes himself to helping 27th and Prospect 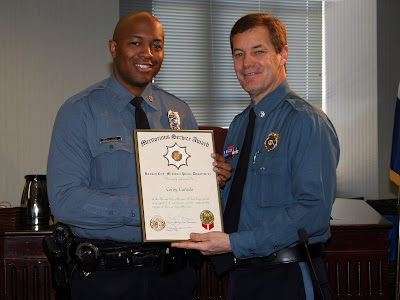 On Tuesday, we presented a Meritorious Service Award to Officer Corey Carlisle - a young officer at East Patrol Division who has a heart for the inner city, largely because he grew up there. Here's what he did:

For too long, Officer Carlisle watched large numbers of people in the area of 27th and Prospect using and selling drugs, participating in prostitution, trespassing and violating multiple nuisance ordinances.
In June 2009, he decided to make a difference in the lives of those who lived, worked and frequented the area. He started learning about the population’s demographics and the specific problems in the area. He put together a thorough plan to identify what led to the area’s issues and how to resolve them that included law enforcement and social service agencies.
Officer Carlisle then created a “knowledge management system” computer program accessible by all department members on the KCPD intranet. This included photos and information of those who frequent the 27th and Prospect area such as a record of the individuals’ contact with police, ordinance violations and property ownership. He showed the program to officers from other divisions so they can use it for their own projects.
Next, he contacted community leaders, business owners, property owners, residents, social service agencies and anyone else he thought could or would help resolve the issues of 27th and Prospect. He coordinated meetings and encouraged other East Patrol members to increase enforcement activity in the area.
The culmination of Carlisle’s work was a community outreach program called “Beyond the Cuffs” that involved police and social service agency leaders. The first major outreach took place Oct. 21, 2009, at Morningstar Baptist Church. Twenty-one people who were identified as living risky lifestyles were fed, examined by doctors and offered free, in-patient addiction treatment. Beyond the Cuffs was so successful that subsequent outreach events followed.
Sergeant Richard Anthony said, “Officer Carlisle has utilized superior problem-solving skills in an ongoing effort to achieve a long-term, significant impact on the problems facing the area of 27th and Prospect.”
Captain Jeff Emery agreed and said Officer Carlisle “has truly established a positive relationship with the citizens who reside in the area and has shown that he is genuinely concerned about improving their overall living conditions.”