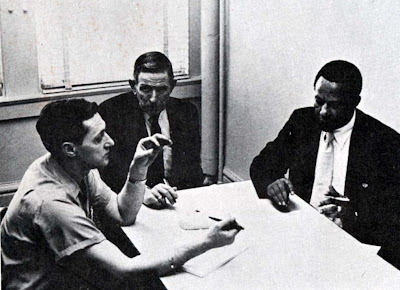 In 1970, the Kansas City Missouri Police Department's Office of Citizen Complaints (the name was later changed to Office of Community Complaints) formally began operation. Our monthly Informant newsletter discusses how the office came about during a divisive time in Kansas City's history and what it means today. The picture above is from our 1969 Annual Report and features OCC's original analysts Willie Walton on the right (he later became OCC's director) and John Halvey in the middle conducting an interview with an unidentified man.

In the thick of Kansas City’s civil rights debate, a battered and bandaged black man showed up in attorney Sidney Willens’ office on a Monday in February 1967.
The man, Claude, was a long-time tenant of Willens’. Through tears, Claude told Willens he had been on his way to work the previous night when two KCPD officers pulled him over, handcuffed him, threw him to the ground and beat him for no reason. Willens said he wasn’t sure whether to believe Claude when he said he’d done nothing to deserve the harsh treatment.
“But it had the ring of truth,” said Willens, now 83 years old and quasi-retired from practicing law.
Willens asked KCPD’s former lawyer Manford Maier and Chief Clarence Kelley if he could review the Internal Affairs file on Claude’s case. After looking at it, he was convinced “something ﻿funny was going on.” And thus began Willens’ uphill fight to start an independent, civilian review board for residents’ complaints against police.
Willens soon found four eye-witnesses to the beating who all said it was unprovoked and brutal. Former Chief Kelley allowed Willens to confront the officers, and they owned up to the truth. One was fired, the other suspended. But that didn’t ease the raging tensions between the black community and police. Riots took place the next year. On July 11, 1969, The Kansas City Star editorial board wrote, “There can be no question that, in recent years, relations between police and minority groups have deteriorated alarmingly.”
At about that time, 400 Kansas City police officers signed a petition against the idea of a civilian complaints office, but Willens persevered, writing a lengthy plan that stressed independent analysis and conciliation. He was finally able to convince Chief Kelley and the Board of Police Commissioners to formally open the Office of Citizen Complaints in 1970, in an office separate from the Police Department.
Kansas City was ahead of its time, says current Office of Community Complaints (the name was changed in 2004 to stress that anyone – not just U.S. citizens – had the right to file a complaint) Director Pearl Fain. After New York City, the Kansas City Police Department was the second in the nation to adopt a citizen oversight agency, making the office’s 40th anniversary all the more unique.
Chief James Corwin called OCC “a benchmark organization in the country.”
“The folks who set that up were pretty visionary,” Corwin said. “They allowed those with a bona fide complaint against police to have it investigated and resolved.”
Current Board of Police Commissioners Vice President Karl Zobrist said he is proud of the way OCC operates.
“Because the OCC reports to the civilian Police Board – not the Chief of Police or the Police Department – members of the public are assured their concerns are fairly and impartially investigated,” Zobrist said.
The Internal Affairs Unit still does the fact-finding in cases of complaints against police that don’t go through mediation, Fain said, but they turn those facts over to civilian OCC analysts who either send the file back for more information or make a recommendation as to whether the complaint is valid. The analysts then submit their findings to the Chief and Board, who determine punishment, if necessary.
“This system works because everyone has some stake in it – the citizens, the police and the Board,” Fain said. “I think it’s the perfect system.”
Zobrist agreed that OCC operates smoothly.
“For 40 years, this system has worked well to address community complaints and to mediate disputes that are the result of misunderstanding or miscommunication,” he said.
Corwin said the best evolution in OCC’s 40 years has been its move to try to mediate minor complaints instead of conducting full-blown investigations. Willens agreed this was important.
“Most people just want to hear someone say, ‘I’m sorry,’” he said.
Send comments to kcpdchiefblog@kcpd.org
at 1:54 PM