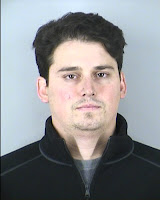 Two KCPD officers were struck at 4 p.m. yesterday in their patrol car at 35th and Euclid. They were hit by a black BMW driven by 30-year-old Frank J. Ross III (pictured above). Ross is alleged to have disregarded a stop sign and T-boned the police vehicle. The patrol car driver received minor injuries and was treated and released. The officer in the passenger seat received serious injuries - including multiple broken bones – and remains hospitalized. Firefighters had to extricate him from the patrol car.
Ross has been charged in Jackson County Court with two counts of assault in the second degree – operating a vehicle while intoxicated. He had a blood alcohol level of 0.185 - more than two times the legal limit. The suspect and his two passengers said they were leaving a Chief's game.
It was ironic that this incident should happen on the eve of our You Drink, You Drive, You Lose week, which runs from today until Dec. 12. During this week, we're dedicating extra enforcement efforts to stopping impaired drivers. This shows many people truly do lose when you drink and drive. My thoughts and prayers are with this officer for a speedy recovery.


Send comments to kcpdchiefsblog@kcpd.org.
at 5:11 PM