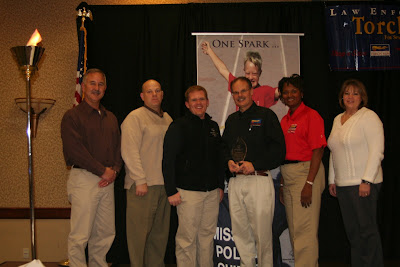 The Kansas City Missouri Police Department long has been a huge supporter of the Special Olympics, law enforcement's charity of choice nationwide. Special Olympics Missouri (SOMO) had their annual Kick-off Celebration Lunch on Dec. 9 in Jefferson City and recognized KCPD as the organization's largest fund-raiser in Region 2. (In fact, KCPD Robbery Unit Sergeant Bernadette Bond was the event's master of ceremonies.) Last year, KCPD raised $126,749 for SOMO through events like the Polar Plunge, Tip-A-Cop and Broadway Bridge Run. This was an increase of more than $37,500 over 2009.

Even more impressive, our own Captain Joseph Chapman received the 2010 John Michael Letz Award, the highest award presented by SOMO's Law Enforcement Torch Run program. The award was named after a St. Louis police officer in 1994 whose long-time efforts led to substantial support of SOMO. It "recognizes an individual whose unselfish efforts and contributions are directly responsible for the success of the Law Enforcement Torch Run for Special Olympics. The recipient is an individual who constantly works to do more, not for recognition but rather in support of SOMO athletes."
In their press release, SOMO called Captain Chapman their "unsung hero." They said he exceeded the required criteria to receive the award by serving as KCPD's Torch Run Coordinator for the last six years and being involved with the organization for the last 15. As Captain Chapman told SOMO, "My main motivation to being involved in Special Olympics is first the athletes, then to educate and donate."
Captain Chapman is pictured in the center of the above picture, along with other KCPD SOMO supporters, at the Dec. 9 luncheon.
The men and women of the Kansas City Missouri Police Department are dedicated to helping others, and they do this on and off the clock. Their amazing support of Special Olympics is just one example of this. Good work, Captain Chapman and the whole KCPD family, for supporting the
Special Olympics cause.
Send comments to kcpdchiefblog@kcpd.org.
at 3:18 PM