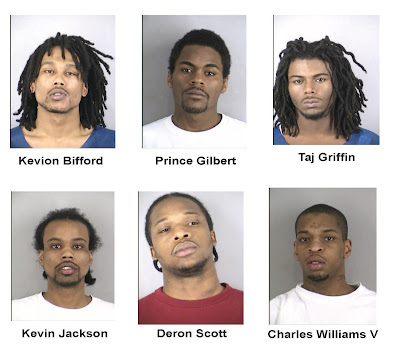 no photo available for 44-y.o. Gary D. Smith
Our Gang Squad's long-term investigation into gang members came to a head today with the announcement of a federal indictment against seven Kansas City men. Their charges involve illegal drugs and weapons, but their sentences could be enhanced because of enhanced statutes that target gang activity. Here's the press release from the U.S. Attorney's Office. You can see more information about the case on their web site: KANSAS CITY, Mo. – Beth Phillips, United States Attorney for the Western District of Missouri, announced today that seven Kansas City, Mo., men have been indicted by a federal grand jury for their roles in a conspiracy to distribute crack cocaine and for illegally possessing firearms.

The federal indictment is part of a joint state and federal effort to target criminal gangs and prosecute such activity to the fullest extent possible. The U.S. Attorney’s Office is working in partnership with the Jackson County Prosecutor’s Office and federal, state and local law enforcement agencies to target gang members for federal prosecution of drug trafficking and firearms violations. At a press conference today, Phillips announced two new strategies that will be employed to combat gang activity.

"Violent street gangs wreak havoc in the neighborhoods where they operate and have a dangerous impact on the entire community,” said Phillips. “My office, in conjunction with the Jackson County Prosecutor’s Office and local, state and federal law enforcement agencies, is committed to protecting our community by targeting illegal gangs and taking illegal guns, drugs and criminals off the street.”

For the first time in the Western District of Missouri, Phillips noted, federal prosecutors have filed notice that they will seek tougher sentences against five of the defendants based on their gang involvement. Statutory enhancements for participating in a criminal street gang (with prior convictions for drug trafficking or violent offenses) would increase the maximum penalties of various counts by 10 years.

Under a partnership with the Jackson County Prosecutor’s Office, a full-time Special Assistant U.S. Attorney has been designated to focus on prosecuting gang-related crimes in federal court.

“We are utilizing a federal grant in order to make one of our assistant prosecutors available to prosecute gang-related cases in federal court,” said Jackson County Prosecutor Jim Kanatzar. “This is a good example of the partnership between local, state and federal law enforcement agencies. By working together, we are able to marshal more resources to combat gang activity and obtain tougher penalties against members of violent street gangs. We are sending the message loud and clear that we will not tolerate gang activity in our community.”

Today’s announcement is part of a coordinated national effort to combat gangs and gang-related violence through federal prosecutions of gang members and associates. The Department of Justice announced today that 38 members of various street gangs have been charged in indictments or criminal complaints unsealed today in five judicial districts. In total, more than 100 defendants have been charged, pleaded guilty or been sentenced in February 2011 as part of this ongoing effort involving U.S. Attorneys’ Offices across the country, the Department of Justice Criminal Division’s Gang Unit, and federal, state and local law enforcement partners.

The government has filed motions to hold all seven of the defendants in custody without bond. According to those court filings, the indictment is the result of a long-term investigation by the Kansas City, Mo., Police Department and the Bureau of Alcohol, Tobacco, Firearms and Explosives into the activities of individuals who identify themselves as members of the Click Clack Gang. The gang derives its name from the sound of cocking a gun or “racking the slide” (putting a round into the chamber) of a semi-automatic handgun. This is corroborated by the number of semi-automatic handguns recovered from the Click Clack Gang and the number of photographs and video evidence of the members with firearms.

The Click Clack Gang operates in the geographic area of Kansas City that is roughly bounded by 27th Street to Emmanuel Cleaver Boulevard, and Jackson Avenue to The Paseo.

Bifford, a singer who uses the street name “Two-Gun Kevi,” has at least one CD cover that depicts him with his face covered with a bandana and in possession of two firearms. One is a polymer frame, semi-automatic handgun with an extended magazine and the other is a machine pistol.

While executing a search warrant in the 3700 block of Wabash Avenue, officers recovered a video camera that contained multiple videos of various individuals and depicted gang affiliation; the use, sale and possession of controlled substances; firearms possession; and the identification of several individuals working in cooperation for the distribution of controlled substances.

Drug-Trafficking Charges
The federal indictment alleges that all seven defendants participated in a conspiracy to distribute crack cocaine between Jan. 1, 2009, and Feb. 10, 2011.

In addition to the drug-trafficking conspiracy, the indictment charges various defendants in five more counts related to the possession and distribution of crack cocaine. Bifford is also charged with one count of distributing cocaine.

Bifford is also charged with possessing a firearm in furtherance of those drug-trafficking crimes. Bifford allegedly possessed a loaded Smith and Wesson 9mm semi-automatic handgun on Nov. 10, 2010.

Griffin is also charged with one count of illegally possessing a firearm. The indictment alleges that Griffin, an unlawful user of marijuana, was in possession of a loaded Glock .40-caliber semi-automatic handgun on April 14, 2010.

The federal indictment also contains a forfeiture allegation, which would require the defendants to forfeit to the government any property used to commit the alleged offenses, or any property derived from the proceeds of the alleged offenses, including a money judgment of $100,000, which represents the proceeds of illegal drug trafficking, $2,438 that was seized by law enforcement officers, a 2000 Lincoln LS owned by Scott, a 2006 Dodge Charger owned by Bifford, and a late model Chevrolet Malibu owned by Gilbert.

Phillips cautioned that the charges contained in this indictment are simply accusations, and not evidence of guilt. Evidence supporting the charges must be presented to a federal trial jury, whose duty is to determine guilt or innocence.