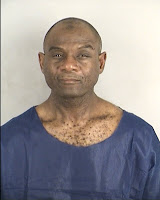 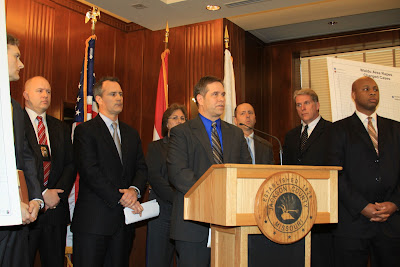 Capt. Mark Folsom, commander of the Special Victims Unit, flanked by detectives, Chief Corwin and Prosecutor Jim Kanatzar at today's press conference.
Twenty-two charges were filed today in the rapes that occurred in the Waldo neighborhood from fall 2009 to early 2010. Detectives, crime lab personnel and prosecutors have worked months to build a strong case against 53-year-old Bernard Jackson. He also is charged with multiple sexual assaults in the same area in the early 1980s and had been in custody since May 2010.

Now that charges have been filed in the latest assaults, I get the chance to praise the tremendous job the men and women of the Kansas City Missouri Police Department did on this case. Jackson County Prosecutor Jim Kanatzar said at today's press conference that this serial rape investigation had more talent and resources devoted to it than any case since Precious Doe.

Kansas City Police devoted more than 10,000 hours to the case. They investigated 955 tips and wrote more than 1,000 reports that totaled 10,000 pages. The Sex Crimes Section, Crime Lab, Narcotics and Vice Division, Perpetrator Information Center, patrol officers and countless others came together to find the suspect and quell the fear that had overtaken the community.

Speaking of the community, you deserve praise, too. The hundreds of tips you submitted helped with this case. In fact, detectives hope to hear again from a particular tipster who called the TIPS Hotline anonymously on Jan. 23, 2010, and described a vehicle seen in the area. We ask that this tipster please call 816-474-TIPS again so we can get more information from you.

This was one of our biggest investigations in some time, and the men and women of this department really stepped up. I'm very proud that we're another step closer to getting justice for the victims.

Send comments to kcpdchiefblog@kcpd.org.
at 3:37 PM