Last year about this time, I told you about a group of six officers who graduated from our 10-week Spanish Immersion program who went on to continue their studies for another five weeks in Mexico. Our latest Spanish Immersion graduation took place April 9, 2010, and this time we were able to send 10 officers to Mexico. They'll be staying with Mexican families there and attending another two college semesters' worth of Spanish courses (they already completed four semesters) in Morelia - Kansas City's sister city in central Mexico. They'll also spend some time with the police there to get a feel for how they operate.

With a growing population of Spanish speakers in Kansas City, it's vital that our officers be able to communicate with them. I've said before that bilingual officers are not a luxury, they're a necessity. Cultural fluency is a must, as well. That's why we do the Spanish immersion program.

Sergeant Lionel Colon will be providing these Dispatches from Mexico updates. He is assigned to our Special Victims Unit. The group flew into Mexico City last Monday, the 19th. They started their visit by taking in some sights around Mexico City with their professor, Lucia:

"Landed safely and have begun our journey. After filling the shuttle with more than enough luggage, we set off to the heart of mexico city to check in to our hotel. After figuring out how to activate the electricity in our rooms, we gathered in the lobby to begin our walking tour. First on the agenda was to sample food at the House of Tiles. The name pretty much says it all - a several-hundred-year-old tile structure with dining and shops. After tantalizing our taste buds, we set off to enjoy the sights and sounds within the downtown district. Probably the most impressive structure was the Cathedral. A reverent place, it was filled with ornate decorations and a solemn atmosphere. We returned for a much needed two-hour siesta before dinner. Or maybe it was just Lucia needing a break from being a transit cop watching our steps while crossing streets..." 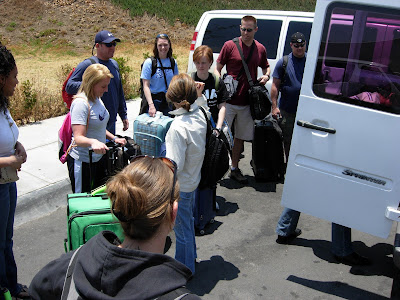 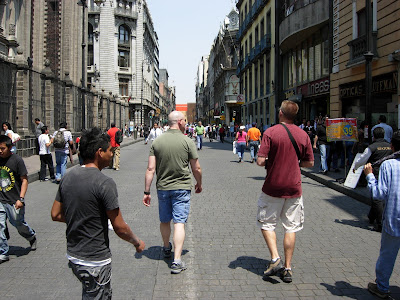 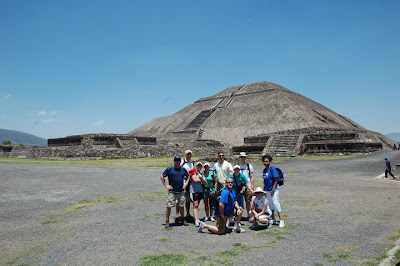 The officers at the Pyramid of the Sun.
Then last Tuesday, the 20th, Sgt. Colon sent this update:

"Just spent the day at the Basilica de la Virgin de Guadelupe. that was impressive after having it as a topic in our Spanish class. Then we went through grid-lock traffic to the pyramids. Our guide was a friend of our teacher, and he is the guide to the stars and other VIPs. Afterward, we went to his house to eat. Wow, it was better than the restaurants. After a few demonstrations at the house (the family is that of Indio tribal leaders) we headed back to the hotel. We are beat and ready for rest. Tomorrow I believe we go to the presidential palace, then to a high-level law enforcement academy, then on the 3-hour ride to Morelia." 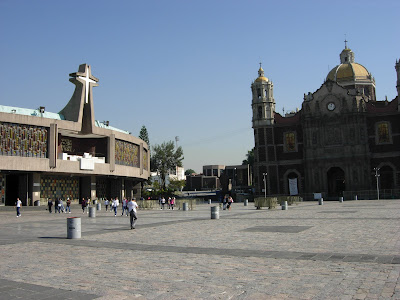 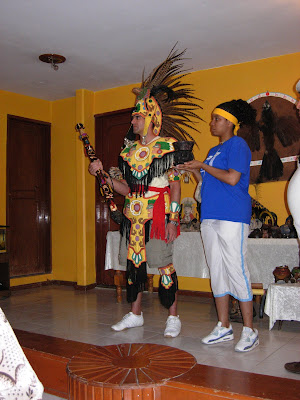 Officers participating in an Indio ceremony at their guide's home.
Look for more Dispatches from Mexico and photos this week!
at 9:11 AM