Ten KCPD officers continuing their Spanish immersion in Mexico are now in the city of Morelia, where they will spend the rest of their time taking classes, staying with host families and learning the culture. Here are the latest updates from Sergeant Lionel Colon:

April 22
"We met at the school for a walking tour of Morelia Central. Didn't think Lucia (our professor) could actually walk that fast, only to find out she is fast out of the gate but soon wears out. We passed through the famous water aqueducts, the local cathedral and then to the main cathedral. We also stopped by the partner English Immersion school. The architecture is amazing. We then stopped in the plaza park next to the main cathedral for a rest. After some people-watching, we paid a visit to a nearby hotel top floor to get a bird's-eye view of the center. What a peaceful and relaxing experience. Lucia then flagged taxis for a ride back to the school. Our taxi driver wasn't at all interested in conversing with us in that he refused to respond to any of our salutations. Later we met up again with our host families for a welcome banquet. It was a pleasant time with the host families and other special guests. 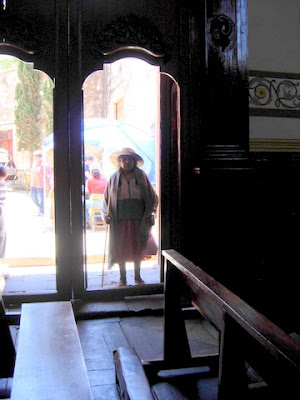 People watching.
April 23
"Today, Friday, was our first official day of class. We all walked with our heavy backpacks (and some with the added weight of laundry). We did 2 hours of workbook, 2 hours of converstation, 1 hour of a special speaker from law enforcement. The breaks were scarce, the homework ample, and many of us had to run back to the cell phone store due to complications. So the 2:30 to 3 p.m. lunches were much needed and welcomed. Tonight, we are all undecided on what to do. The concensus is something peaceful at a locale to people watch.

April 24
"Saturday, the team went to Santa Clara, known for its copper artisans. We watched as the elder artisan prepared a block of copper into the first stages of a plate. We also observed a vase in mid-prep. Afterward, we shopped in his store and found some amazing and ornate pieces. Then we spent a little time in the nearby plaza. It was beautiful and relaxing as we mingled among the people. 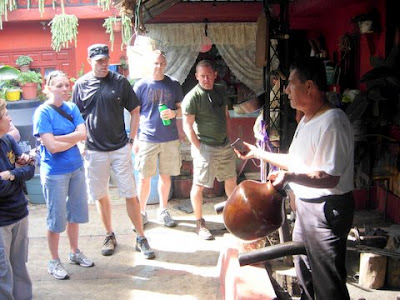 Watching the copper artisan at work.
Soon thereafter the team set off to Patzcuaro. It was a bit larger and there were many vendors and townspeople about. This area was known for its ice cream. and of course we had our fair shares. Again, as with the former excursions, the architecture was amazing. What was most appreciated in these smaller towns was the peaceful ambiance. Many of us felt the culmination of the lack of rest from travel and found ourselves resting in the plazas and people watching.

Saturday evening we met at the school with Lucia's niece, Sandra, for a taste of World League futbol. The stadium was packed, and the energy was electric. One section bounced and sang to the beat of huge drums for most of the two-hour event. The riot police were in full view, but I didn't see one scuffle. In fact, I witnessed opposing fans talking in a friendly manner and even exchange pleasantries. One thing i did find in common, they know how to tailgate. We made friends in the stands. We stood out and many went out of their way to welcome us and ensure us not to worry because they liked Americans and that the media magnifies negative reports. We practiced our spanish and they their English. that in itself was quite a game, as well. 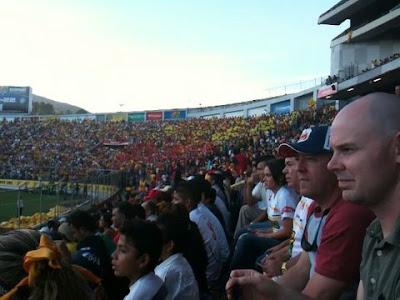 At the futbol game.
April 25
"The last couple of days were pretty normal. On Sunday, some attended church with their families. Others spent the day relaxing. A few made it to the shopping malls and Wal-Mart to stock up on a few things for the month. All of us at some point completed our tarea - homework, whic consisted of vocabulary exercises and composition.

April 26-27
"Classes on monday and tuesday were action-packed with the introduction of numerous new words, expressions and dialogs. Tuesday afternoon/evening was spent with the Conversation CCL class. The first portion of class was spent rotating with numerous students in their native Spanish language. The second portion was spent speaking English with the students to afford them the same benefit we had with them in the previous conversations. It was time well-spent because there was a wide range of topics discussed. There was a peace in the communication because both their students and ourselves were in the same boat in regard to learning of a second language."

Send comments to kcpdchiefblog@kcpd.org
at 9:13 AM