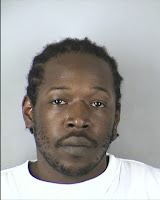 Kansas City police are investigating two homicides that took place overnight. The first took place at 12:42 a.m. near 57th and Highland. Officers were dispatched to 57th & Wayne but found 25-year-old Antonio Foreman (pictured above) lying on the ground suffering from an apparent gunshout wound in the 5700 block of Higland. Freeman died several hours later at a local hospital.

Less than half an hour later at 1:06 a.m., officers were called to the 7-11 at 8105 E. Bannister Road on a shooting. They saw the store clerk, 35-year-old Gurpreet Singh, lying on the floor with an apparent gunshot wound. Singh told them a suspect entered the 7-11 and demanded money. Singh gave the suspect money, then the suspect pulled out a small handgun and shot Singh. Singh was transported to a local hospital, where he later died. The entire incident was recorded on 7-11's video surveillance system. Police are seeking information on three individuals captured in the video:
1.) The black male suspect, wearing a black, hooded coat or sweatshirt
2.) A black male in a dark coat with a white T-shirt underneath standing with the suspect
3.) A black female in a white shirt standing near the store's door.
If you have any information on either case, please call the TIPS Hotline at 816-474-TIPS (8477).
Send comments to kcpdchiefblog@kcpd.org
at 2:44 PM