MARCH 10 UPDATE: A jury found Manning guilty on all counts yesterday. His sentencing date is pending. 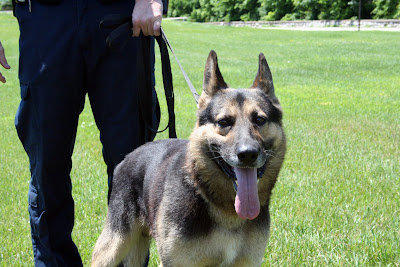 Trial started at 9 a.m. today in Jackson County Circuit Court for 34-year-old Marlyn Q. Manning. This is meaningful to us because Manning is charged with not only felony burglary but also assault on a police animal.

At 10:28 p.m. June 2, 2008, police received a call about prowlers in the 10 block of West 79th Terrace. Officers actually saw the suspect – later discovered to be Manning – breaking out a home’s window and attempting to climb inside. When Manning saw the officers, he took off running. The officers on scene could not catch up with him, so they called in back up, the police helicopter and a canine unit to find the suspect. The canine officer and his dog, a Czechoslovakian Shepherd named Soty (pictured above), quickly tracked Manning down behind a building. But despite commands from the officer, Manning kept running, so the officer sent Soty to stop him.

Soty caught up and latched onto Manning, stopping him for officers to arrest. But instead of giving up, Manning proceeded to hit and kick the dog. Despite this, Soty continued to hold onto Manning until officers could place him in handcuffs. Soty’s human partner, Officer David Magruder, said he could tell the next day how sore the dog was from the assault.

Soty is a tough dog. In November 2004, a suspect was attacking Officer Magruder, and Soty came in to stop him. The suspect bit Soty, prompting a trip to the emergency vet and some time off to recover. In June 2007, Soty found a man who shot a KCPD officer and physically pulled him out from under a car in a garage. That capture was broadcast nationally on the TV show “COPS.”

But as tough a dog as he is, Soty got hurt when Manning attacked him. Soty retired last May and is now living the good life at home with Officer Magruder and his family, but he deserves justice like any other police officer assaulted in the line of duty.