Police have identified the victims of a Friday night homicide and Saturday afternoon fatality car crash.
The homicide took place at about 8:15 p.m. Friday, March 26. Police were called to 5637 Norton to investigate the sound of shots being fired. When they arrived to the scene, they found 21-year-old Jamil D. Ragland lying in the parking lot of the Friendship Village apartments. He had been shot and was pronounced dead at the scene. He is pictured below. Anyone with information in the case should call 816-474-TIPS. 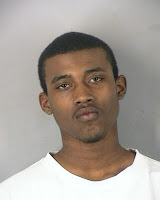 Then at about 3 p.m. Saturday, March 27, KCPD accident investigators went to meet officers on the scene of a confirmed fatality crash at Gregory Boulevard and 71 Highway. Investigation determined that a 30-year-old Kansas City man driving a Chevrolet SUV was westbound on Gregory at a high rate of speed. The SUV passed through traffic on the northbound 71 side, but then collided with a line of vehicles, which were stopped facing west at a red light on Gregory at southbound 71. The victim, 12-year-old Damien Slayton of Kansas City, Mo., was a back-seat passenger in the first vehicle struck and was pronounced dead at the scene. The two other occupants in that vehicle, one of whom is Damien's mother, were transported to a hospital with life-threatening injuries. Two drivers from other cars went to the hospital with minor injuries. In all, five cars and seven people were involved in the crash. The suspected driver was transported to a hospital with serious injuries, and police continue to investigate the crash.
Send comments to kcpdchiefblog@kcpd.org
at 9:06 AM