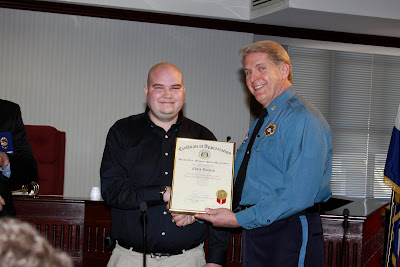 Tuesday was a busy day here at KCPD HQ. We swore in a new police commissioner and gave out a number of awards, including a Certificate of Appreciation to Kansas City resident Chris Jancich.

He didn’t know it at the time, but Chris helped solve 12 burglaries because of his astuteness.
At 11:16 a.m. September 17, 2009, Mr. Jancich was home from work to run errands when he saw a woman knocking on his neighbor’s door across the street on Northwest 95th Place. She kept looking around like she was watching for someone. After she knocked for a few minutes, the woman went around the back of the house, and soon Mr. Jancich saw the house’s garage door opening and the woman inside. Mr. Jancich thought this was strange, so he called police and continued to watch what was happening. He told the calltaker the woman got in a black car he didn’t recognize, backed it into the garage, and closed the garage door.
Officers arrived a couple minutes later and contacted Mr. Jancich, who gave them all of the details of what he’d seen. The officers knocked on the house’s front door and could hear someone moving around inside, but no one answered the door. They called for back up to cover the home’s exits. One officer remained in constant contact with Mr. Jancich and was eventually able to get the contact information for the people who owned the house. The homeowner came from work to the house with a garage door opener and key. He said no one should be inside at that time. Police then captured the woman Mr. Jancich saw climbing out a basement window with a bag full of stolen goods, including a laptop computer belonging to a neighbor burglarized earlier in the week. Officers found a broken kitchen window through which she’d entered.
Property crimes detectives later discovered that the woman and her boyfriend were behind multiple burglaries in Jackson and Clay counties. A dozen burglaries were solved through this one case.
Sergeant Skip Cox said Mr. Jancich’s perceptive and judicious actions are a reminder of the high quality of people living in Kansas City. He said, “It would have been easy to just go about his business and ignore the situation. Instead, Mr. Jancich chose to make a difference.”
Send comments to kcpdchiefblog@kcpd.org
at 11:52 AM